Disneyland announced that it would close its gates on Saturday through the end of the month.

The Disneyland Resort, one of California’s largest employers, with 31,000 workers, announced through a statement that it will temporarily close beginning on Saturday, March 14, 2020 in response to the coronavirus outbreak in California.

According to Brooks Barnes, Hollywood reporter for the New York Times since 2007, this is the fourth time in the park’s history that operations have been fully suspended, and the first time since 9/11. Before that, it had closed after the 6.7 1994 Northridge earthquake in Los Angeles and on the national day of mourning after the assassination of John F. Kennedy.

On Wednesday, Gov. Gavin Newsom and state health officials urged canceling large gatherings of more than 250 people until at least the end of March, per Business Insider. The California health officials’ guidance says gatherings like concerts, conferences, and sporting events “should be postponed or canceled” across the state.

According to the 2019 California State University-Fullerton study commissioned by Disney’s parks division, Disneyland had an economic impact of $8.5 billion dollars for the state, which could have made a case for keeping the theme park open, but, with an average of 50,000 visitors a day sprawling across nearly 100 acres of park, Disneyland seems to blow way past state health officials’ descriptions of large gatherings.

USA Today reported that Tokyo Disneyland also closed on Wednesday amid the pandemic. 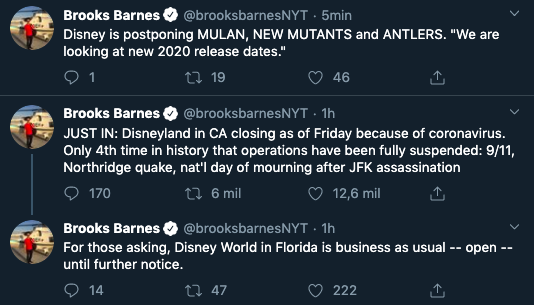 Restitution: how these Old Master works confiscated by the Gestapo were returned more than six decades later

Our Favorite Photobooks of 2021

How the cloud helped me choose a gaming console