Europe’s youth gave their answers towards what their country should be tackling.

The second European Youth Study, carried out by pollster YouGov on behalf of TUI Foundation, revealed that Europe is making a comeback among young people and taking a different shape that what we imagined in the past. Strengths, opportunities, achievements, debates, and even worries over government priorities have flourished, involving every citizen.

According to the poll, young Europeans (aged 15-24) believe that the principal task for the European Union (EU) for the next five years is the fight against poverty and inequality, terrorism, the lack of well-being, immigration, and economic growth, but especially climate change and education, as a GZERO Media infographic shows. 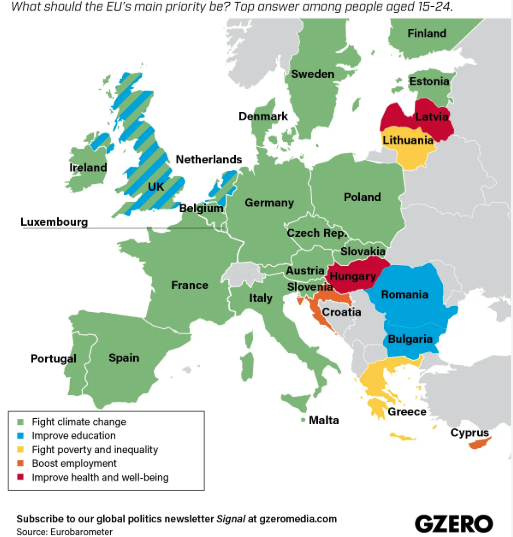 Complementary to the information from GZERO Media, TUI Foundation also showed that while pro-European attitudes are rising, young adults continue to distrust authorities and institutions, as only 33% have said to trust the European Parlament or the EU Commission. This trust falls even more when it comes to trade unions, public media, political parties, and churches. The highest levels of trust are found in science, the police force, courts, and public broadcasters.

Almost one in two (45%) think that the political systems needs to be reformed, while a further 28 per cent believe that only ”radical change could fix it” again.

82% of all respondents use the Internet to inform themselves about current political affairs, while only 30% of them use printed newspapers and news magazines.

When searching information on the Internet, Facebook ranks top at 44%, followed by online newspaper and news magazine versions (34%) and YouTube (28%). Although Facebook is a highly relevant source of information, respondents assess it as untrustworthy.

Relationship with their country

Young Europeans’ views of the relationship between their country and the EU have changed, too.

The report by TUI Stiftung found that in 2018 35% believed their country and the EU needed each other equally, compared to 29% in 2017. 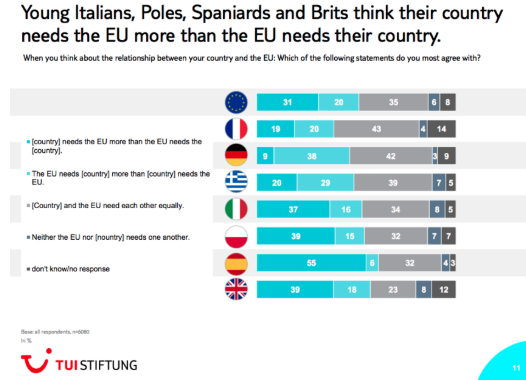 Click here to read on how Americans’ trust in Government capability, press, and Congress is at a historic low-point.

If Spring Break Patterns Hold, May Indicate That U.S. Travel is Back at Pre-Pandemic Levels

UNWTO and WHO: Travel Measures Should Be Based on Risk Assessment

How to win the race to capture travel demand