New Delhi suffocates, the US begins the process of exiting the Paris Agreement… what’s in store for the world amid rising concerns of climate change?

Early November, the Donald Trump administration began its year-long process to formally exit the Paris Agreement, turning the United States into the only country in the world that is not participating in it.

Meanwhile, the Indian capital of New Delhi entered on November 5th to its 10th consecutive day of hazardous air pollution, a public health emergency that’s caused flight cancellations, school closures, and the banning of a large number of cars in a sprawling city that’s home to around 30 million people that face serious precaution ahead dangerously high the levels of PM2.5 (atmospheric particulate matter that have a diameter of less than 2.5 micrometers).

Although we may be talking about the situation in two distant countries, the problem is the same because they are the two sides of the same coin: Air pollution and climate change are closely related. According to the Institute for Advanced Sustainability Studies (IASS), as well as driving climate change, the main cause of CO2 emissions – the extraction and burning of fossil fuels – is also a major source of air pollutants. What’s more, many air pollutants contribute to climate change by affecting the amount of incoming sunlight that is reflected or absorbed by the atmosphere, with some pollutants warming and others cooling the Earth. Air pollutants include more than just greenhouse gases—principally carbon dioxide but also methane, nitrous oxide and others—but there’s a big overlap: the two often interact with each other. 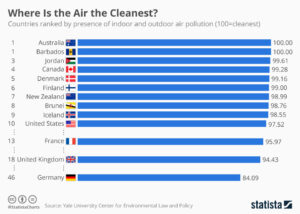 Air pollution clearly impacts the U.S. economy, costing the U.S. roughly 5% of its yearly gross domestic product (GDP) in damages ($790 billion were reported in 2014), according to recent Stanford research. The highest costs come from early deaths, attributable to exposure to fine particulate matter (PM2.5). Like agriculture, transportation, utilities, manufacturing, each sector has its story of damages from its emissions. According to reporting by Reuters, the U.S. Embassy air quality index indicates a current level which can cause “serious aggravation of heart and lung disease, and premature mortality in people with existing diseases and the elderly”. India as a whole has some of the most dangerously polluted air in the world, and joins Egypt, Niger, Tajikistan, Afghanistan, Nepal, and others as the countries with the most estimated years of life expectancy lost due current air pollution levels in 2019. Australia, Barbados, Jordan, and Canada, on the other hand, rank as the countries with the cleanest air in the world, according to the Environmental Performance Index. The U.S.’s air quality has been veering down recently, according to the American Lung Association., and ranks 10th on the Environmental Performance Index.

However, despite the tough facts, there is one big benefit from those problems being interlinked: By reducing air pollution we also protect the climate. UN Environment states that quick action on reducing highly potent, short-lived climate pollutants like methane, tropospheric ozone, hydrofluorocarbons and black carbon can significantly decrease the chances of triggering dangerous climate tipping points, like the irreversible release of carbon dioxide and methane from thawing Arctic permafrost.

A real problem… who is to blame?

By now, most people have accepted that climate change is real, and that it is happening. What we can’t all agree on though, Martin Armstrong writes on Statista, is what the main cause is, and it may not be that hard to determine that we as humans are the main factor behind the speed and extent to which our climate is changing, despite we still find excuses.

A surveyed audience by YouGov showed that India has the largest share of people that think human activity is mainly responsible for climate change (71%), Spain (69%), Great Britain (51%), Germany (49%), France (48%), and China (45%) follow in the the share of people saying they think the climate is changing and human activity is mainly responsible in 2019.

Adding to the concern, a Stanford study led by economist Marshall Burke also found a link between increased temperatures and suicide rates, determining that climate change could increase suicide rates by 1.4% in the United States and 2.3% in Mexico by 2050. Both suicide rates and the use of depressive language on Twitter rise when temperatures rise. The research also concluded that socioeconomic status had little to no impact, meaning wealth does not help insulate populations from suicide risk.

Economist Marshall Burke stated: “Clearly, climate is not the only factor affecting mental health, and many approaches to addressing the growing mental health challenge will have nothing to do with climate (…) But we find clear evidence that a warming climate is going to exacerbate the burden of poor mental health and ignoring this evidence is going to cause unnecessary harm and anguish for a lot of individuals and families inside our country and out.”

Everyone needs to play their part in turning the world into a healthier place, and younger generations are understanding this role. The Washington Post and Kaiser Family Foundation found that 57% of U.S. teens are afraid of climate change. Nearly the same share of teens feels motivated by climate change. Only one in five teens reported being uninterested in climate change.