Deaths outnumber births year on year in Japan, and a major labour shortage is expected, as well as a more relaxed employment regulations for foreigners.

The Japanese population with ages 65 years or older, currently accounting for 28.5% of the population (about 124.22 million as of 1 October 2018), has nearly quadrupled in the last 40 years to a point of no return, making ages and deaths outnumber births year on year. Births in the nation of the rising sun hit a decline of 27,668, turning the nation’s current birth rate into the lowest since records began in 1899, at 1.42, despite that the fertility rate needed to maintain the population in Japan is 2.07. Ministry officials have predicted that the number of births will continue to drop.

Economic and social conditions, plus the difficulty of simultaneously managing both work and child-rearing are considered to be some of the major reasons behind the declining birth rates. Higher costs for education and parenting, a high pace of migration toward cities, poor work–life balance, a decline in wages, and gender pay gaps are other meaningful factors that have resulted in the demographic emergency of Japan.

Despite several attempts to promote policies to set up an environment where people who want to have children can have children and raise them at ease, Japan continues to combine the world’s lowest fertility rates with the highest life expectancy, becoming one of the countries with the fastest natural population decline in the world, along with Romania and Bulgaria, according to the Financial Times. 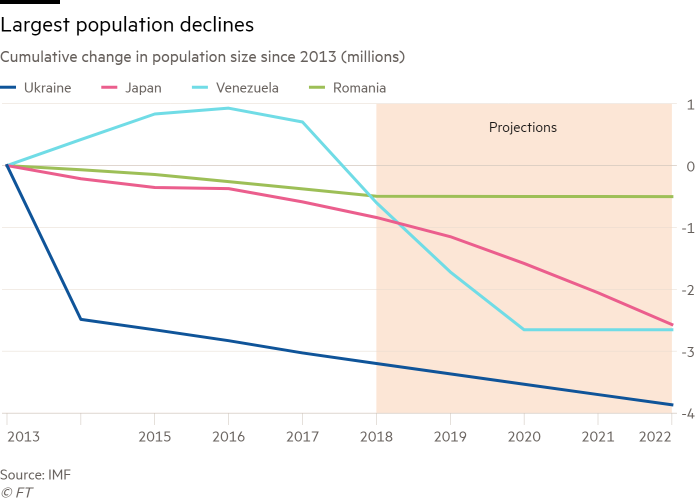 The rise in foreign workers is helping moderate the sharp decline in the Japanese population.

According to annual statistics released this month by the Ministry of Internal Affairs and Communications, there are now 2,667,000 foreigners living in Japan – an increase of about 170,000 from 12 months earlier, accounting for 2.09% of Japan’s total population. People from South Korea, China, and Vietnam represent the single largest immigrant population.

The country’s strong economy and immigration reforms has boosted foreign investment, and therefore workers, however, there is a debate whether these immigrants will become long-run migrants.

Foreign workers settling and having children in Japan could strongly help revert the aging population problem, and that is why the government has facilitated the process of permanent residence and generated new employment regulations. Data from the South China Morning Post states that some 345,000 working visas are expected to be issued in the first five years, but this does not seem to be enough to address the shortfall in certain industries like food services, machine operating, cleaning, fishing, construction, and others.

According to researchers at Tohoku University, if the population continues to decline at the current rate, the Japanese will be extinct by August 16, 3766. The calculation is based on the fact that the current population of children aged up to 14 — 16.6 million — is shrinking at the rate of one every 100 seconds, Agence France-Presse reported. The researchers reportedly did not take into account potential disasters, wars, or other global changes.

When the clock strikes 2030, an important demographic milestone is also set to loom upon the U.S. for the first time in its history. Read more about it here.

Risk oversight and the board: navigating the evolving terrain