Cyber Monday first entered the public consciousness back in 2005, when it was coined by Shop.org to describe the day where online spending spiked as holiday shoppers got back in front of their computers at work after the holiday weekend. In 2012, Black Friday rose in prominence for online retailers as it surged to more than $1 billion in sales for the first time. The 2018 holiday season may be remembered as the year that Thanksgiving Day cemented its status as its own online shopping phenomenon.

Thanksgiving generated $3.7 billion in online sales while boasting an impressive 28% year-over-year growth rate, to rank as the third heaviest online spending day of the year, according to Adobe. And it earned that ranking by a comfortable margin, easily surpassing otherwise important online shopping events like Green Monday (December 10, 2018) and Free Shipping Day (December 14, 2018). 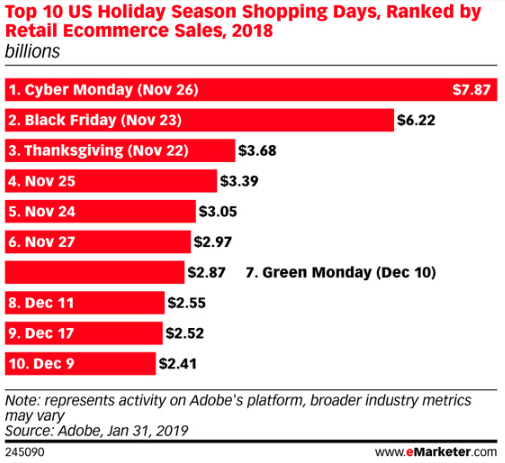 Yet rarely do we talk about Thanksgiving as a promotional event in its own right. Thanksgiving was once a day for family, feasts and football, but when brick-and-mortar retailers opened the floodgates to Black Friday shopping on Thanksgiving a few years back, retailers needed to begin taking it seriously—even amid some backlash as retailer’s stores called their sales associates away from their families in the early evening hours of the holiday.

Now, it seems that shoppers in the US have grown accustomed to Thanksgiving as a shopping day, but what’s behind the recent ecommerce surge?

In a word: mobile.

In the days before smartphones, US shoppers were perhaps less inclined to scurry away from family members to start shopping on their home computers. And if they were at their friends’ or relatives’ houses, they didn’t even have that luxury. But smartphones are now with people at the dinner table, on their couches after stuffing themselves, and in-store for those who manage to peel themselves away from their TV screens.

Smartphones accounted for the majority of digital shopping traffic for the first time this holiday season with 51% of visits, while contributing 31% of ecommerce sales, according to Adobe. Thanksgiving’s couch commerce boost was apparent, however, as it generated 38% of sales from smartphones—well ahead of both Black Friday (33%) and Cyber Monday (28%). 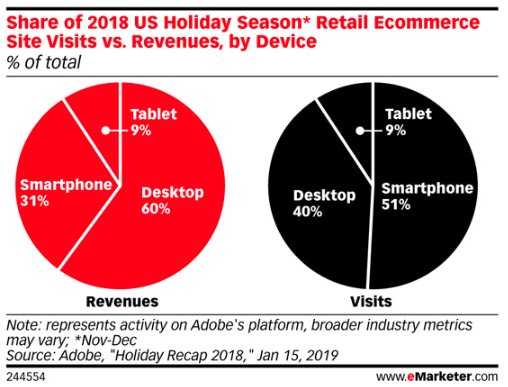 As we look ahead to the 2019 holiday season, the stakes are even higher, and Thanksgiving will gain in importance. Not only is the overall retail environment much more uncertain given the potential impact of tariffs, rising costs and a wobbly stock market, retailers will encounter the buzz saw of a shortened holiday calendar. With Thanksgiving five days later this year on November 28, the number of shopping days between Thanksgiving and Christmas gets sliced from 32 to 27. This creates both logistical headaches and significantly crimps the opportunity for self-purchases and incremental shopping trips, which can mean added pressure on the top and bottom lines.

If retailers want to make their numbers, they’re going to need to blow it out of the water on the big promotional days. And the evidence suggests these days do take on added importance during the truncated shopping season, as evidenced in 2013: the last year Thanksgiving landed on November 28.

In 2013, spending growth on the key promotional days massively outstripped the overall season performance, according to Comscore. While total spending climbed 10%, sales for Cyber Monday—the biggest day of the holiday season—increased 18% to $1.7 billion; spending on Black Friday increased 15% to $1.2 billion.

And by the way, despite a significantly improving economic situation at the time, that 10% growth rate in 2013 fell well below the performance of adjacent years. “Ultimately, it seems that spending softness relative to expectations was mainly the result of the compressed holiday calendar,” said Comscore’s chairman at the time, Gian Fulgoni. “With just three weeks of online shopping between Thanksgiving and Christmas, consumers did not have the same opportunity to buy what they would have in a more typical holiday season. They made up for it to some extent by spending significantly more online on the weekends, but so many fewer workdays provided a headwind for the season that ultimately proved very challenging to overcome.”

With that in mind, retailers need to spend time re-examining the 2013 season now if they have any hopes of avoiding the impending turbulence in 2019. And then they need to take action.

A key first step is for retailers to get their app downloaded on shoppers’ phones; otherwise, they miss out on the opportunity to be front and center with their customers. App promotion needs to stop being relegated to a footnote in marketing promotions and instead be introduced as a more explicit appeal. Right now, that could mean email marketing campaigns and in-store reminders, or even providing special discounts for downloading the app, adding payment details, or conducting a transaction.

There are plenty of ideas and plenty of time to activate them before the holiday season. Make it a priority to put a Thanksgiving Day strategy in place and treat it as the important holiday promotion it has become. With as much as $4.5 billion in ecommerce sales up for grabs next year, why wouldn’t you carve out your share of the Thanksgiving feast?