Gift-givers in the US are expected to spend a record-breaking $20.7 billion during Valentine’s Day 2019.

An eMarketer article by Lucy Koch

This year, US Valentine’s Day gift-givers will spend a record-breaking $20.7 billion, according to the National Retail Federation (NRF). This despite a declining percentage of Americans choosing to celebrate the holiday (51%, down from 55% last year).

A January 2019 Valentine’s Day survey from Bankrate had similar findings—younger millennials (those aged 23 to 29) and Gen Xers lead spending, expecting to average $267 per person on holiday purchases. 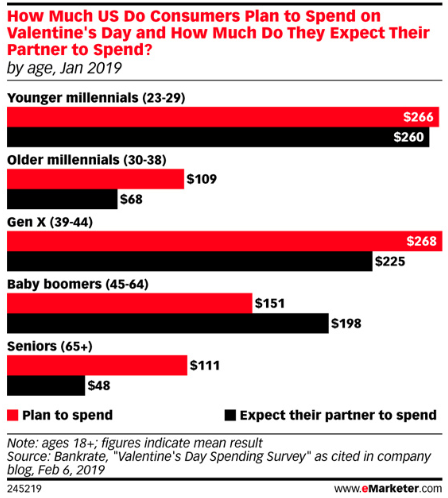 Of more than 1,000 consumers surveyed, Bankrate found that nearly one-fifth (18%) of younger millennial respondents expect their partner to spend $200 to $500 on gifts.

Younger millennials’ “sky-high expectations could be a result of how tapped the generation is into social media,” Bankrate noted. Millennials feel the pressure to keep up with their friends’ spending habits, and 57% say they parted with money they hadn’t planned to spend because of what they saw on their social media feeds, according to Allianz Life Insurance Company of North America data published in February 2018. This means we can expect to see plenty of pink posts come February 14.

Self-Love Is in the Air:

The biggest surprise in this year’s numbers is consumers’ focus on spending for themselves.

A November 2018 survey from Finder found that consumers will spend roughly $236 on themselves this Valentine’s Day—more than triple last year’s $71. In fact, only wives ($358) and kids ($280) top consumers’ self-spending, according to the survey. 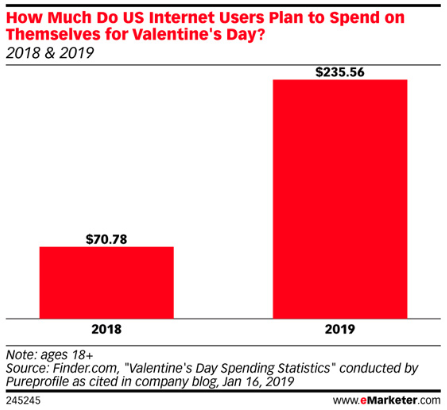 “It’s pretty telling that people who spend on ‘myself’ would be quite generous about it. Boyfriends, girlfriends and even spouses may come and go, but one’s self is always there as a loved one,” said eMarketer senior analyst Mark Dolliver.

Dill You Be My Valentine?

Flowers, candy and dinner dates still take the cake among shoppers, but more unorthodox gifts are not out of the question.

This year, pet spending will total $886 million, and experience-type gifts, including tickets to events or a trip to a spa, will be gifted by 25% of consumers, according to NRF. What’s more, shoppers can gift pickle bouquets, or for those anti-Valentine’s Day gifts, consumers can even name a cockroach after a bad ex.