As the US-led mission in Afghanistan nears its 19th year, SIGNAL looks beyond the US-Taliban meeting controversy to study what’s actually happening with the longest war in America’s history.

As the US-led mission in Afghanistan nears its nineteenth year, we have now reached a point where a child born on this date in 2001 — before the attacks of 9/11 — is old enough to be deployed there. Over the weekend, President Trump scuttled months-long negotiations with the Taliban that were meant to end the longest war in America’s history.

While that decision provoked the usual storm of partisan recriminations in Washington, Afghanistan’s political, social, and economic fabric continues to deteriorate. Consider that Afghanistan recently surpassed Syria as the single most violent country in the world.

With peace talks in limbo and the country’s future uncertain, here’s a look at what’s happening in Afghanistan today.

A political patchwork — Afghanistan’s political scene is fractious and unstable. Five years ago, after an inconclusive presidential election the US backed a power sharing deal between President Ashraf Ghani and his rival, Abdullah Abdullah, who holds the post of chief executive. Crippled by tribal divisions and endemic corruption, Afghanistan’s unity government has failed to govern effectively. It controls less than half of the country’s districts.

The Taliban, meanwhile, have staged a resurgence in recent years – they now control more land than at any point since before the US invasion in 2001. Their control of the lucrative opium trade nets them more than a billion dollars a year. Their gunmen and suicide bombers have killed hundreds of ordinary Afghans in recent years. They have refused to negotiate directly with the Kabul government, which they consider a puppet of Washington. They will speak only to the US, and only about one thing: conditions for the withdrawal of US troops. A deal on that score seemed near until this weekend.

An economy in shambles — Violence and corruption have sapped the promise of Afghanistan’s economy. For years, warlords and criminal networks have squandered foreign aid intended to stimulate businesses and jobs. For the first time, unemployment for youth has topped 40 percent, the bleakest mark on record, according to a new Gallup poll. As more people struggle to get by day-to-day — 90% of Afghans recorded experiencing financial hardship, the highest in the world last year—a destructive cycle of poverty and violence has become a key part of the Afghan experience.

Afghanistan, the worst place to be a woman — The US-led ouster of the Taliban after 2001 opened up new freedoms for women, who, under Taliban control, were barred from going to school or working, and were routinely stoned for transgressions like attempting to flee forced marriage. More women have enrolled in universities and some men have been prosecuted for domestic violence, long an epidemic in Afghanistan’s deeply patriarchal society. Still, eighty-seven percent of Afghan women are illiterate and three quarters of its female population are victims of forced marriage.

Long delayed presidential elections are scheduled for later this month. The Taliban oppose the ballot, and they are likely to carry out a spate of attacks on elections, as they’ve done in the past. The US, meanwhile, has recalled its chief negotiator with the group. Afghans, weary after years of war, are bracing for a fresh surge in violence.

Following President Trump’s last-minute decision to scuttle Afghanistan peace talks between the US and the Taliban, the country’s political future is more uncertain than ever. The US-backed government in Kabul controls less than half of the country’s districts. The rest are controlled or actively contested by Taliban fighters or warlords. Here is a map of who controls what in a country that is still very much up for grabs. 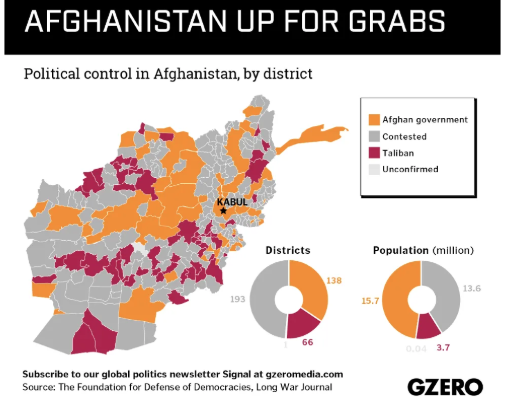 Mobility In the Eye of the Storm

Think Expansively and Creatively About Talent

Can Resilience Shape a Shifting Landscape?

What a Divided Government Means for Business

A C-Suite United on Cyber-Ready Futures

The Human Paradox: From Customer Centricity to Life Centricity

Can Too Much Disclosure Hurt Profits and Innovation?