Instagram revamps is Explore page by including a navigation bar featuring shortcuts to “IGTV” and “Shop”.

Instagram today announced a revamp to its Explore page that will now include a navigation bar featuring shortcuts to “IGTV” and “Shop,” as well as channels tailored to individual interests like food and travel. The Explore grid will also feature Instagram Stories.

According to the social network, more than 500 million people use Instagram Stories every day, so the features that stand to gain the most from this Explore page shuffling are shopping and IGTV.

Last year, Instagram made it possible to shop within a post, and in an effort to make in-app purchases more seamless, it launched its Checkout feature in March.

As for IGTV, Instagram has pretty much exhausted every which way to promote its long-form, vertical video platform. The standalone IGTV app has all but merged with Instagram’s main app. In late 2018, Instagram allowed users to share IGTV videos in the Stories. Earlier this year, Instagram announced IGTV clips would start appearing in people’s feeds. And now IGTV is getting yet another moment in Instagram proper’s sun on the Explore page. It would seem as if all of the above is somewhat paying off: Since its stumble out of the gate, there’s reportedly been an upswing in IGTV views. 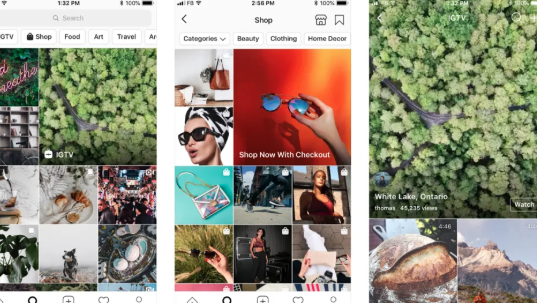 Show Me the Digital Value