An eMarketer forecast reveals a major milestone in the world of advertising is happening.

A major milestone in the world of advertising is happening: Digital ad spending will exceed traditional ad spending in the U.S. for the first time ever.

According to eMarketer’s latest forecast, by 2023, digital will surpass two-thirds of total media spending.

Also for the first time, the combined share of the duopoly (Google and Facebook) will drop, even as their revenues grow. 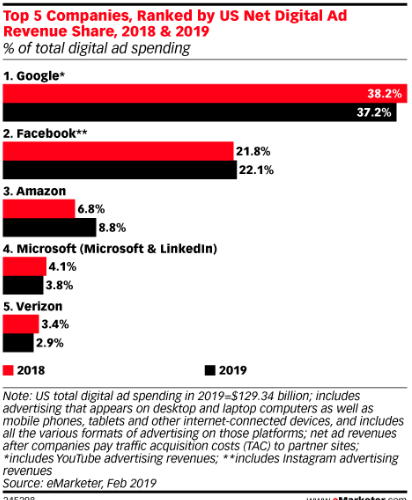 The big winner this year will be No. 3 player Amazon, which continues to take share from just about everyone. Its US ad business will grow more than 50% this year and its share of the US digital ad market will swell to 8.8% this year.

“Amazon offers a major benefit to advertisers, especially CPG and direct-to-consumer [D2C] brands,” said eMarketer forecasting director Monica Peart. “The platform is rich with shoppers’ behavioral data for targeting and provides access to purchase data in real time. This type of access was once only available through the retail partner to share at their discretion. But with Amazon’s suite of sponsored ads, marketers have unprecedented access to the ‘shelves’ where consumers are shopping.”

A struggle for traditional ad spending

Where are the digital dollars coming from? Directories, such as the Yellow Pages, will take the biggest hit—down 19% this year. Traditional print (newspapers and magazines) spending is a close second, which will drop nearly 18%. Overall, traditSional ad spending’s share in the US will drop to 45.8% in 2019, from 51.4% last year.

“The steady shift of consumer attention to digital platforms has hit an inflection point with advertisers, forcing them to now turn to digital to seek the incremental gains in reach and revenues which are disappearing in traditional media advertising,” Peart said.

TV ad spending will decline 2.2% to $70.83 billion this year, largely because there are no elections or big events, such as the Olympics or World Cup. The presidential election next year will propel TV ad spending back into positive growth, before falling again in the following years.