Perception and reality in the Canadian economy

Canada’s economy looks to be in good health, but a recent CBC poll shows its citizens are concerned.

The general consensus is that Canada’s economy is doing OK. Maybe not great, but certainly not bad.

Yet with a federal election on the horizon, that’s not exactly the kind of news that wins votes.

“The aggregate economic data in Canada is looking quite strong,” Frances Donald, chief economist and head of macroeconomic strategy at Manulife, recently told CBC. “We have plenty of jobs, wages are rising, GDP numbers are fairly solid.”

Yet a new CBC poll instead points to economic anxiety for Canadians, with 32% saying that the cost of living is the issue they are most worried about heading into the election.

What’s more, concern about the cost of living ranked as the top worry for every segment of Canadians polled: Indigenous Canadians, new Canadians, first-time voters, and visible minorities.

While just one in 10 Canadians say they’re not getting by financially, another 68% say they “have to think about how they spend money.” And concern over jobs ranks seventh in terms of what concerns people the most.

In many ways, it’s easy to understand why. While the broader economy is doing well, the impact on ordinary Canadians is often the opposite: housing affordability is at crisis levels in Toronto and Vancouver, energy prices are still stubbornly low, and child-care costs are a burden on many families. Debt levels remain high. Wages are beginning to rise, but growth has been slow.

Yet there are still many positives if one analyzes the data closely.

When asked to rank their top three most important election issues, 35% of Canadians polled listed “jobs/the economy.” Nevertheless, the Canadian economy added 27,000 jobs in May, and in April, a spectacular 106,500 jobs were added. In all, nearly half a million jobs were added to the economy over the past twelve months.

In other good news, wage growth is coming in above inflation, meaning Canadians are seeing their wages rise faster than the cost of the things they buy.

What’s more, many of the jobs being added are high-paying tech and financial services jobs.

Misconceptions exist elsewhere in the economy as well. The CBC poll found that 54% of respondents worry that accepting too many immigrants would be a bad thing for Canada—yet economists insist more immigration is needed.

Indeed, given a “rock-bottom” 5.4% unemployment rate, the Conference Board of Canada recently released a report highlighting the need for further immigrant workers in both the high skilled and low skilled categories.

Part of the disconnect that Canadians feel regarding current economic data appears to rest heavily on perceptions of different sectors of the economy–most of which are formed from what they hear in the news.

Geographical factors undoubtedly also play a part with citizens living in urban, rural, and oil-producing parts of the country affected very differently by what is happening at the national level.

Amid trade wars, low commodity prices, and other global turbulence, the Canadian economy is doing pretty well–but during an election season, perception is often more important than reality. 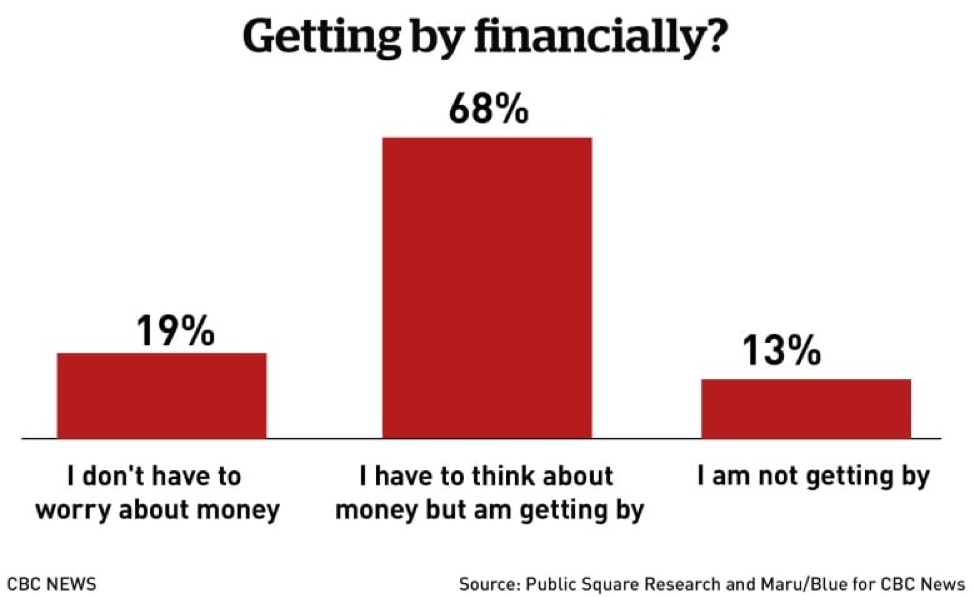