Migration: A work for all

The UN International Migrants Day is annually held on December 18 to recognize the efforts, contributions, and rights of migrants worldwide.

Migration is a global phenomenon driven by many forces. It starts with aspirations for dignity, safety and peace, but in almost every situation, it turns out to be always extreme, and, too often, even fatal. Migration, is, in essence, a courageous expression of the individual’s will to overcome adversity and to live a better life, but barely a day goes by without multiple media reports – whether in traditional or newer forms of media – focusing on aspects of migration, frequently on negative aspects.

Under this ideals, on December 4th, 2000, the General Assembly, taking into account the large and increasing number of migrants in the world, proclaimed 18 December International Migrants Day. On that day, in 1990, the Assembly adopted the International Convention on the Protection of the Rights of All Migrant Workers and Members of Their Families.

Now, under the current global estimate that there are over 270 million international migrants in the world, which equates to more than 3.3% of the global population, and the fast-changing globalization process along with important advances in communications and transportation that generates a sense that we are in the midst of a period of considerable uncertainty, it is time to work on an agenda that promises to leave no one behind. 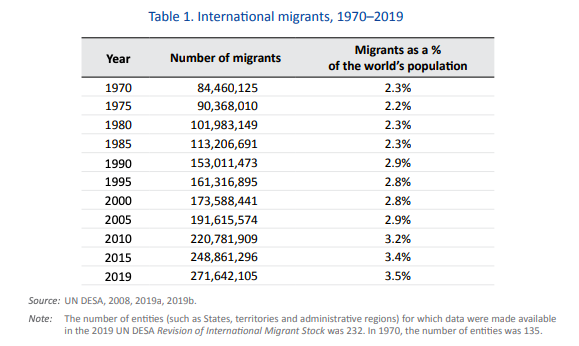 To fully attempt the commemoration of the International Migrants’ Day, here are some interesting facts considering the widespread of migrants across the world, according to The World Migration Report 2020:

“All migrants are entitled to equal protection of all their human rights. On this International Day, I urge leaders and people everywhere to bring the Global Compact to life, so that migration works for all,” UN Secretary-General, António Guterres.

The 2030 Agenda for Sustainable Development recognizes for the first time the contribution of migration to sustainable development. 11 out of the 17 Sustainable Development Goals (SDGs) contain targets and indicators relevant to migration or mobility. The Agenda’s core principle is to “leave no one behind,” not even migrants, but efforts must be constant and rigid to really see a change regarding migrants.

Mobility in the eye of the storm