When Mark Ashcroft was appointed CEO of Harkness Screens, the world’s leading screen technology company, in 2013, he inherited a 84-year legacy of enhancing the moviegoing experience by producing the best quality and most state-of-the-art cinema screens in the world.

Today, with manufacturing facilities in Europe, the US, and Asia, Harkness has evolved from a single site manufacturing company to a multinational player at the very forefront of screen technology.

Harkness Screens specializes in providing 2D and 3D screen technologies and innovative solutions and services to the cinema and live events markets. Founded in 1929, the company was once owned by Britain’s historic Rank Organization. Today, it produces a range of cinema and event screens for digital and laser projections from Clarus XC, Perlux HiWhite, Spectral, and Precision White for RealD, to Qalif presentation monitoring tools, apps, and services. With production facilities in France, China, India and the US, the company currently serves over 130 countries.

“We started life as an English company, but we were schooled in Europe, did our tertiary degree in the USA, and today learn in China and India,” Ashcroft told CEO Magazine. “Today, the bulk of our growth happens outside of Europe, in India, China, Latin America, and obviously the US, which is still a dominant marketplace. “In a world where the consumer is used to looking at content on a mobile phone or tablet and they maybe have a 55-inch, 4K TV, more and more consumers notice how good a screen actually is. So, it’s really important for us to continue to develop the quality of the screen itself.” 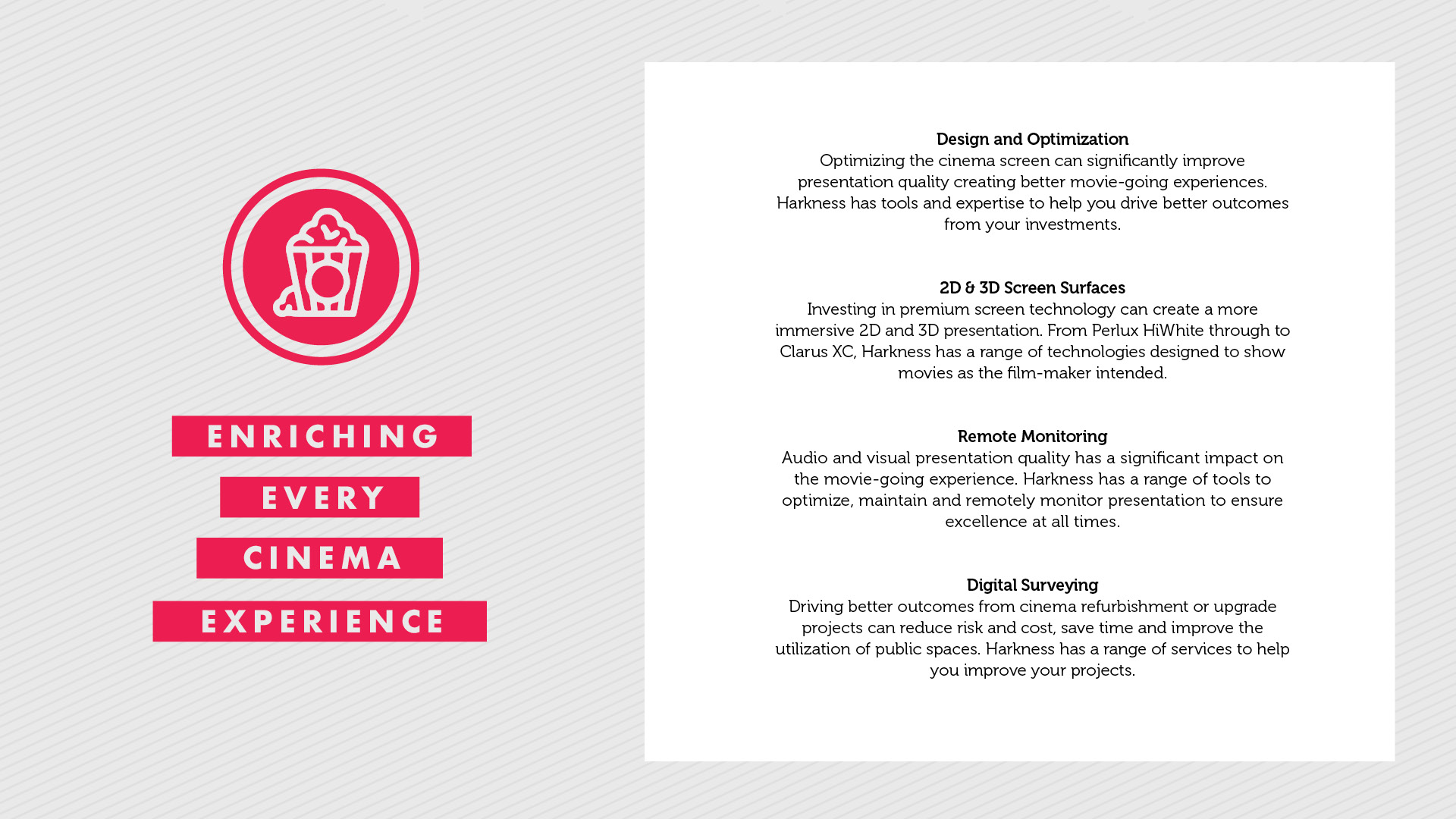 Accessibility to high quality images and sound via HD TV screens and home entertainment systems and a variety of mobile devices means that the principal goal of big screen manufacturers like Harkness is keeping the cinemagoing experience fresh and vital amid an increasingly competitive market, and Ashcroft believes the key advantage he brings to Harkness is a career spent in the business of optics and on-screen entertainment.

“When I took the CEO position with Harkness, I’d come from fifteen years of working in the US, with responsibility for international markets,” he explained. “I’d been with a consumer optics business called Zeiss and US retailer called Party City. I had a great deal of experience in optics and light management, which for a cinema screen manufacturer, is very important. But I’d also had the experience of working in the retail entertainment sector, understanding how important the consumer’s journey is. Coming to Harkness was an opportunity to combine those two past experiences to take the business forward.

“That’s pretty much what I set about doing—to take Harkness from what I’d describe as a manufacturing company, and really transform it into a genuine technology business that supports cinemas.”

To this end, Harkness has invested heavily in world-class manufacturing facilities, including new state-of-the-art facilities in China and the US.

According to Ashcroft, the combination of the demand for higher 2D image quality and the growth of 3D has prompted a significant R&D initiative by Harkness, both to enhance the way 2D movies are shown and determine the best way to present 3D images.

“Disney recently announced a big schedule of 3D movies to come out between now and 2023,” he explained, by way of example. “That’s going to be really interesting because it raises the following questions: what’s the best 3D system available, and how do we design screens to allow those iconic and highly sought after releases to be brought to the audience? We’re on stream to introduce new 3D screen technology in the next eighteen months or so, as well as being able to provide the monitoring systems to guarantee the light levels for 3D.

“One of the big criticisms people have of 3D movies is very often they’ll say they’re too dark, which is really all about the light levels,” Ashcro elaborated. “We’ve developed electronic monitoring systems which can now enable light levels to be improved, making the moviegoer’s experience that much better.”

State-of-the-art technology may currently be the key ingredient in the production of cinema screens, yet Ashcroft emphasized that there is still a role for individual craftmanship in the design of Harkness’s products—as a result, the company continues to invest in the recruitment and training of the best young design talent from around the world.

“Our manufacturing process is really a combination of artisanship and science,” he insisted. “The process requires every cinema screen to be manufactured in a bespoke way. Harkness invented what is described as an invisible seam which allows cinema screens to look like one large piece of material when, in fact, it’s made of several components. That invisible seam is really the work of an artisan, not a scientist. It’s very hands on; it’s a very exacting, dexterous operation.

“So, the way in which you recruit and retain people who work on that process is very different to the team fifty meters down the road which is composed of coatings specialists who are developing and spraying hi-tech coatings onto the surfaces. Within one factory, there are two sides to the coin—the artisans, and the scientists. They need to be motivated differently, and that’s a really important area for us.”

Given the difficulty of transporting its finished product, Harkness has a unique supply chain that enables the reliable distribution of their products throughout the world.

In addition, the raw materials the company purchases, which are mostly chemicals, often need to meet different environmental and health and safety standards, leading Harkness to develop its own intellectual property and chemical formulations depending on the market the company is serving.

“With regards to supply chain, the interesting thing is that cinema screens are very big items, so if you look at our factories, they could be 100,000 square feet in size, but only employ twenty people,” Ashcroft illustrated. “The screen itself could be 130 x 60 feet in size. It’s then rolled, and has to be transported. That today remains one of the biggest challenges for the company—how to logistically move these items around. Some of the most important collaborations we have are with the specialist international and local freight logistics transport organizations.

“As far as the raw materials, these are manufactured by co-or contract manufacturers, and we find that we’re able to work with these partners in a way that we can change formulations should we have an issue,” he elaborated. “For example, it might be that a certain fire certificate is required for a screen sold in South Korea. To make that screen acceptable under Korean safety regulations, we would work very quickly with the supply chain to amend the formulation.”

“In addition, we’ve got three digital suppliers that work with us on our modeling and optimization so ware, which is the way we guarantee image quality,” Ashcroft added. “The digital platform created by Harkness continues to lead the screen industry and new versions of the modeller and calculator are planned later this year.” 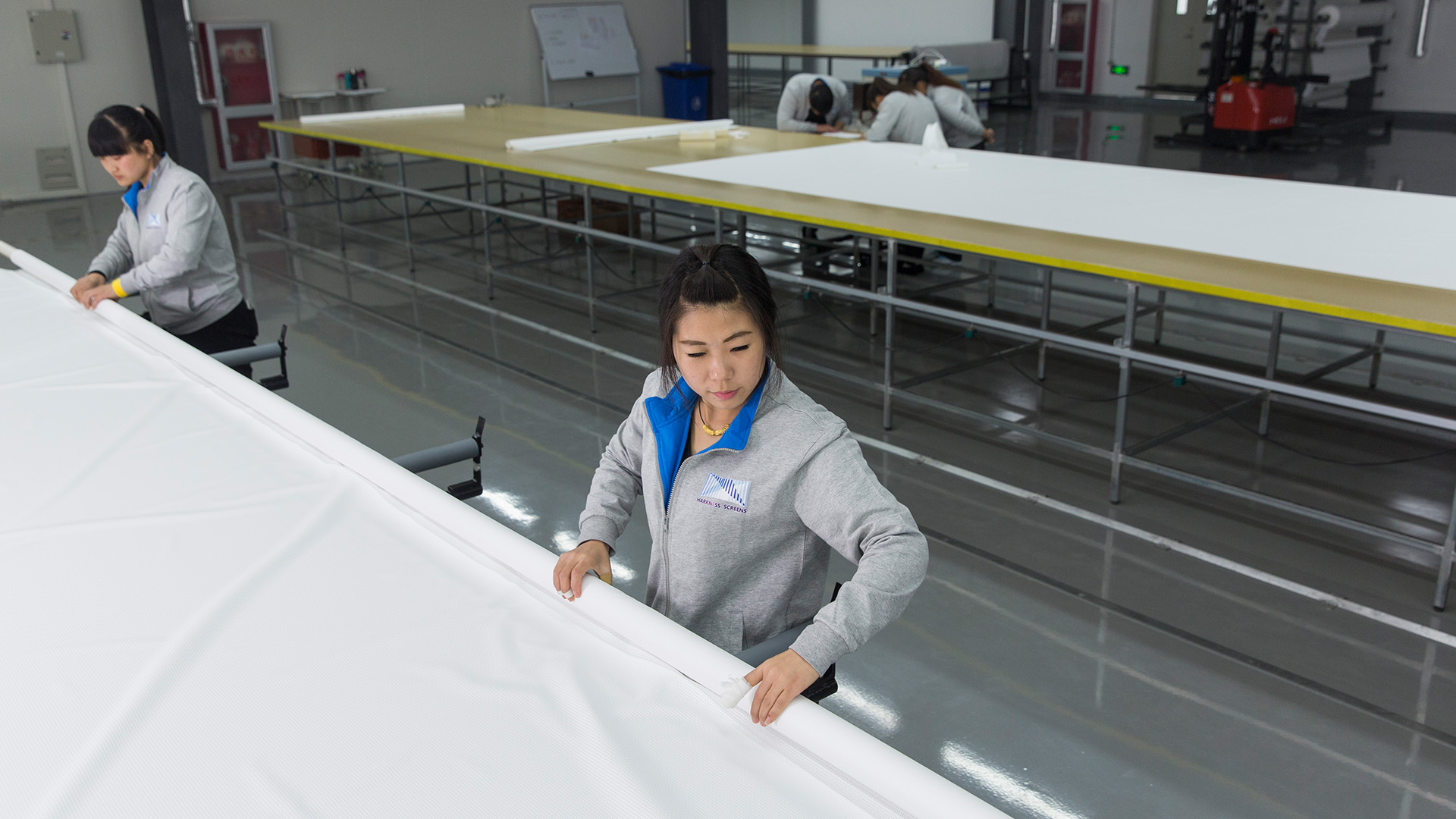 Building on a rich history

Harkness Screens will celebrate its 90th birthday on September 12 this year, having managed to stay in business and evolve amid the rapidly changing nature of the movie industry. Yet one thing that hasn’t changed is the company’s commitment to providing the moviegoer with a compelling cinematic experience.

“That’s the DNA that makes the business so enjoyable to lead,” Ashcroft insisted. “Having a single focus is great, but it also requires constant innovation, and Harkness today are probably the leaders in screen research and development. If I was to look across at our competitors, the significant difference is the level of investment that Harkness makes into R&D. Realistically, 10% of our workforce is within R&D. That’s something we don’t see anywhere else.

“We’re at a point where the screens we manufacture today can compete against any form of screen image whether it’s LED, smartphones, or anything else,” he stated. “Those ninety years of innovation are a real source of pride for us.”