Building the machinery that saves lifes

Oshkosh is looking at the future with a unique business model and a commitment to pushing people. 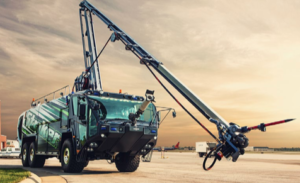 For Wilson R. Jones, President and CEO of Oshkosh Corporation, quality products mean the ability not only to keep customers and shareholders happy, but also to make a difference. The company, which celebrates its 100-year anniversary this year, designs and builds the access equipment, specialty vehicles, and accessories that enable military personnel, technicians, and fire and emergency services to go about extremely dangerous work safely, and for Jones, that can be incredibly rewarding.

“When you hear a soldier’s mom or his wife talking about how one of our military vehicles saved his life and you share those testimonies with your suppliers, you get a higher level of inspiration,” he says proudly. “ e differentiator first and foremost is our people who rally around the goal of protecting the serviceman in a war zone and the firefighter or the technician working 185 feet in the air.”

Unlike many global industrials, Oshkosh Corporation, founded in Oshkosh, Wisconsin, operates across four key business segments – access equipment, defense, fire and emergency, and commercial – to appeal to a broad range of customers in the public and private sectors. With operations in 28 countries, their products range from refuse collection vehicles and concrete mixers used by municipal governments in the United States to military vehicles favored by the US’ Department of Defense in combat zones and emergency-response fire and emergency vehicles.

Jones took over as President and CEO in January 2016 with the benefit of thirty years of experience in the specialty vehicle and construction business, eventually spending three years as president and COO of Oshkosh –experience that not only enabled him to better understand the markets he currently serves, but also convinced him of the value of people to any successful business enterprise.

“When you hear a soldier’s mom or his wife talking about how one of our military vehicles saved his life and you share those testimonies with your suppliers, you get a higher level of inspiration”

“I’ve always been a student of people,” he says. “I’ve learned over the years through being in experiences where unfortunately people weren’t valued as much as they should have been, but I’ve also been in situations where I was part of a leadership team that really did value people. I’ve put that into practice at Oshkosh, and you certainly see that it’s making a difference in our company today.”

Upon becoming CEO, Jones looked to continue the company’s flagship MOVE strategy, based on four core principles: Market recovery and growth, Optimize cost and capital structure, Value innovation, and Emerging market expansion. “We call ourselves a Different Integrated Global Industrial,” says Jones. “We really work to integrate whereas a lot of industrials don’t. Today, we’re taking technologies from our defense segment and sharing those with our fire and emergency and our commercial segments. We’re taking products to market in a third of the time we used to just because we’re sharing intellectual property.

Despite an ongoing slump in the US’ construction industry, one of Oshkosh’s key markets, the company saw revenues and earnings per share grow in FY2016 and is expecting further success in 2017. Furthermore, the company is highly regarded in the wider business world for its practices. In 2016 and 2017 it was named to the World’s Most Ethical Company list by the Ethisphere Institute, the global leader in defining and advancing the standards of ethical businesses, and recently picked up the Workplace Excellence Award from the governor of Wisconsin. It is also included in Forbes America’s Best Employers list.

Overseas and emerging markets form an increasing part of the company’s growth strategy. In FY2016, approximately 24% of the company’s revenues came from outside the US and the firm boasts manufacturing operations in Australia, Belgium, Canada, China, France, Mexico, Romania and the UK as well as operations to support sales or deliver services in over 150 countries.

“In Asia, India, all around the world where you think about countries that are going through rapid urbanization, we’re going to have good opportunities there with our access segment,” Jones explains.

“That’s becoming a really sustainable competitive advantage for us,” he adds. “Five years ago, our different business segments competed with one an- other. Today, they collaborate.” “There are also a lot of airports being built today in places that want to attract tourism. With that you’ve got to have the proper fire protection or the big carriers simply won’t go in there.” “Commercially, we have lots of opportunities with concrete mixers and refuse collection vehicles, mostly down through Central and South America,” he adds. “We’re also selling a lot of our defense vehicles in the Middle East right now.”

For Jones, none of this would be possible without a commitment to operational excellence that includes identifying efficiencies, inducing collaboration between different business divisions and achieving supply chain excellence through close and productive strategic partnerships, all areas in which Oshkosh is continually looking to improve. He particularly emphasizes what he calls the company’s own version of the Toyota Way –the Oshkosh Operating System– which is dedicated to understanding the customer. 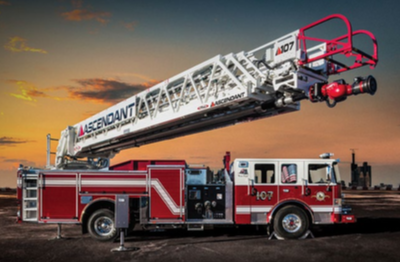 “We started with the question of why: ‘why are we doing this?’” says Jones. “We focused on 15,000 team members getting up every day thinking about how they can not only understand who their internal customer is, but how they are dealing with that customer and what they need to do to improve. It’s a case of driving the DNA of how you think, not just because it’s a box we need to check each month when we go through our strategy employment exercise.”

“We really believe that if we take care of our in- ternal customers, the external customer and our shareholders will be very happy,” he says. Yet incentivizing staff is also key to both innovation and performance.

“What we learned is that a lot of improvements were taking place in different business segments that would also work well in others,” he explains. “So, we started what we call the Oshkosh Excellence Awards so that team members, whether they’re working in the finance area or the production floor or sustainability, they document ideas that have worked and put them in a program which is shared across the company because what works in one segment will work in others.

“We judge them and each time a team wins in a certain category, Oshkosh Corporation Foundation gives them funds to donate to the local charity of their choice,” Jones says.

This sharing and learning process works on sever- al levels and Jones believes it has been crucial to the company’s success. “We’ve taken some of the worst-performing product categories in different segments and worked to increase performance, which increases margins,” he explains. “Another step we’re taking now is what we call simplification. That’s going in and seeing where the complexity is in a given process. Our team members know because they’re frustrated. If there are things that aren’t creating value should we stop doing those or should we redesign the process? I call it a journey – a continuous improvement journey.”

“If there are things that aren’t creating value should we stop doing those or should we redesign the process? I call it a journey – a continuous improvement journey”.

Oshkosh also looks to innovation on the supply chain front. Six years ago, the company centralized its purchasing and developed the Global Procurement Supply Chain Academy as a way of integrating suppliers into the process of constantly improving quality and customer service.

“We bring in suppliers and we work with them on supplier quality issues, supplier development, helping them understand what we’re trying to do,” Jones explains. “The suppliers that have been performing in one segment, we try to leverage them into other segments and make them a little bit bigger. When they have ideas for new product development that we aren’t thinking about it, they share them. We see our suppliers as partners.”

Chris Moore, President and CEO of Northeast Wisconsin Industries, a large production machining operation, has partnered with Oshkosh Corporation for many years, speaks highly of the exposure to Oshkosh Corporation: “We have and continue to significantly improve our own operations assisted by the developmental support Oshkosh provide us which, in our experience, is without equal across other major original equipment manufacturers for which we produce.”

Jones says that Oshkosh’s key strategy for future growth is to be quick to seize on opportunities.

Ultimately for Jones, passion and the will to keep moving forward are what really drives Oshkosh’s success.

“We have this perseverance DNA in our company,” Jones says. “We’re continuously working to improve our culture and that will continue to improve our business. is will be the third year that we will grow revenue earnings in a year that our largest segment will be down again. We really believe that being a different integrated global industrial with a positive long-term outlook will bode well for us over the next several years as we continue to make a difference in people’s lives.”

“We’re taking products to market in a third of the time we used to just because we’re sharing intellectual property. at’s becoming a really sustainable competitive advantage for us”