U.S. parents get digital after dark

Surveys show that the #1 post-bedtime activity for parents is watching TV or movies.

What does parents’ downtime mean for marketers?

After the children are tucked in, most parents probably intend for that time to be quiet and interruption-free. But relaxing after the kids are asleep typically involves media consumption—which can also be an opportune window for marketers to reach those parents.

The No.1 post-bedtime activity for both mothers and fathers is watching TV or movies, according to an August 2018 survey by Brigham Young University and Deseret News. Mothers are more likely than fathers to use this time for interaction with people outside of the household. And more respondents in both groups said those interactions took place on social media, rather than on phone calls or texts. 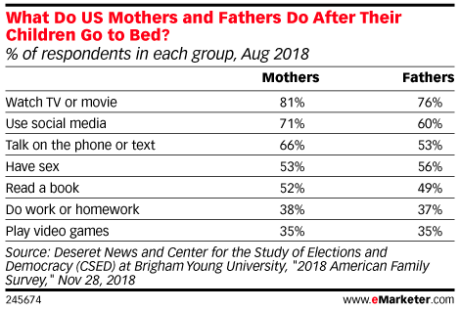 These digital activities top the number of respondents who cited other common bedtime activities like having sex or reading a book.

Parents aren’t on their devices before bed just for entertainment purposes, they’re also shopping. In the OpenX/Harris Poll survey, 46% of parent respondents said they use their phones in bed at night to research purchases more than once a week, and 20% said they transact in-bed purchases by phone that often.

“Shopping for a household with kids can often be one more chore that busy parents must perform—but doing some of it during this part of the day probably gives a more recreational feel to it, especially if they’re looking to buy something for themselves,” eMarketer principal analyst Mark Dolliver said. “A marketer has a chance to get in sync with this mood by assuring parents that they’re entitled to a little self-indulgence at the end of a long day.”