The linear model of plastic use and dispose hasn’t been challenged for over two decades.

It sounded like a great idea: packaging that is flexible and can take any shape and form, it’s light yet durable, easy to transport, cheap, and allows us to store fresh food for longer. Therefore plastic packaging was adopted quickly and across all industries, which has resulted in massive amounts of waste.

None of the commonly used plastic boxes, bottles, tubes, wrappings etc. are biodegradable and there are no systemic models for recycling plastics on a large scale. Therefore, plastic waste accumulates in landfills and does not decompose. Near-permanent contamination of the natural environment is an unavoidable consequence.

The rise and rise of plastic

Plastic has been the fastest growing man-made material on the planet. Over the last 33 years it’s been growing faster than any commodity and half of the plastics ever produced were made in the last 13 years.

The sector mainly responsible for this inexorable rise is packaging, now at 40% of global plastic use. What accelerated the growth was the shift from reusable to single-use items. Convenient, but at the same time polluting and expensive. According to the estimate of the World Economic Forum (WEF) it costs us around USD 80 to 120 billion each year: This is the material value of plastic packaging we throw away after a single use.

The plastic waste crisis is here

By 2015, around 6,300 million tons of plastic waste had been generated. Around 9% of it was recycled, 12% incinerated, and 79% accumulated in landfills or the natural environment. The linear model of use and dispose haven’t been challenged for over two decades due to heavy reliance on waste exports. Higher-income countries have been exporting as much as 70% of their plastic waste to developing countries in East Asia and the Pacific that haven’t established waste management systems yet. 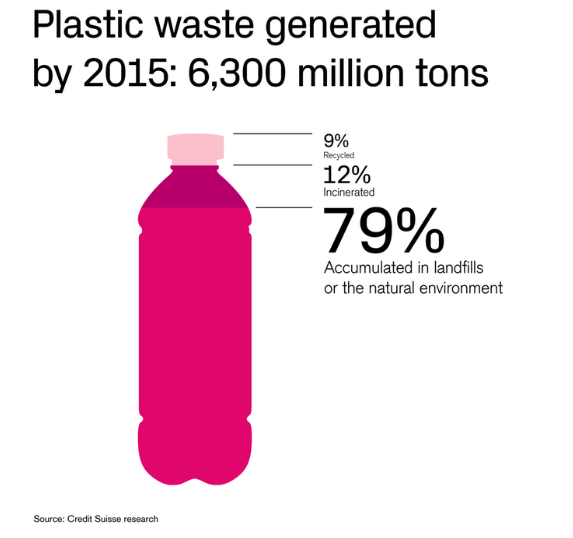 However, the era of waste exports is coming to an end. In 2017, China introduced a ban on importing certain types of plastics, which was later followed by some other countries in the region. These restrictions have been a severe wake-up call for exporting countries and an incentive to act.

What are plastic pollution solutions?

The amplification of the waste crisis in the media and the growing awareness among the public have brought the problem to the fore. Governments and supranational bodies have started issuing regulations on plastics production and usage.

Companies will need to re-consider their products, packaging solutions, as well as waste management systems. The circular economy can be a powerful transformative tool. Its foundation is the principle of keeping material resources in use or “circulating” for as long as possible. It aims to extract the maximum value from resources while in use, then recover and regenerate products and materials.

Social entrepreneurs have already entered the field, initiating various businesses ranging from turning plastic waste into new products such as fabrics, or seeking alternatives for packaging such as resistant yet water-soluble material. There is also a trend for bioplastics and plastic made from captured greenhouse gases.

No doubt it is a tough but exciting time for innovations in materials science for plastic manufacturing, technology improvements in waste processing, and developing technologies that create new opportunities.