The world’s richest countries are full of anxious, alienated people, and they’ve little faith in their governments to do anything about it, according to Bloomberg.

According to a survey of 22,000 people in 21 OECD countries, there’s a “clear sense of dissatisfaction and injustice” in advanced economies. A majority believe they wouldn’t easily access benefits if needed, less than 20% say they get a fair share given the taxes they pay, and in many countries most people feel governments ignore their views.

For governments, the study highlights a challenging paradox: people are unhappy with social policies even as evidence shows they are living safer, healthier and longer lives thanks to those very policies. And they already spend a lot: on average more than 20% of economic output goes on social spending, or about $8,800 per person per year.

Even within individual countries, the healthiest and wealthiest with the most opportunities are still dissatisfied.

The report also shows that people do not want to roll back the state or cut down on social spending. On the contrary, they want more spending, and on average almost 40% say they’re willing to pay more tax to improve public-health services and pensions. 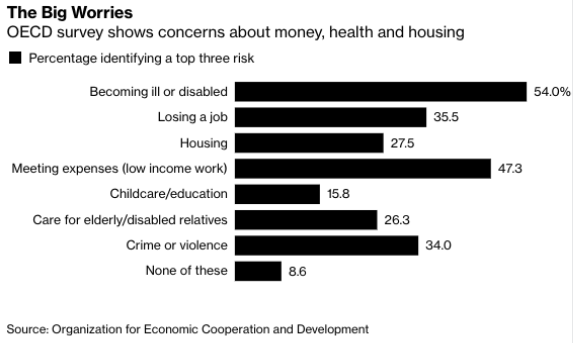