For the first time, Forbes has analyzed the earning power of podcasts.

Podcasts have enjoyed of great popularity in the United States.

According to Statista, in 2006, only 22% of the adult population in the United States was aware of this term, but this figure rose to 70% in 2019. Just last year, there were an estimated 86 million podcast listeners in the U.S., a number which is forecast to grow to around 132 million by 2022.

With these increasing numbers, it’s evident that there should be top podcasts, and with that in mind, Forbes analyzed the highest earners of 2019, and Statista made a chart. 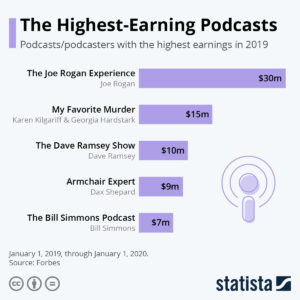 How governments can solve the EV charging dilemma

Natural gas prices are soaring. Here’s why the U.S. may not suffer from the rise.

Here’s what high cotton prices mean for retailers and consumers