Navigating the rising tide of uncertainty

In a word, the results spelled uncertainty, as surveyed CEOs reported increased pessimism in every region, even showing significantly diminished confidence in their own organisation’s 12-month revenue growth prospects. And uncertainty weighs on growth.

Only 27% of surveyed CEOs are ‘very confident’ in their prospects for revenue growth in 2020, a low level not seen since 2009.

According to the PwC 23rd Annual Global CEO Survey, in every region — Africa, Asia-Pacific, Central and Eastern Europe (CEE), Latin America (including Mexico), the Middle East, North America and Western Europe — the prevailing sentiment is the same: global economic growth will slow in 2020.

The report states that the percentage of CEOs citing a decline in the rate of growth exceeds 50% in all but two regions: Asia-Pacific and CEE, and nowhere has the swing been more pronounced than in North America, where half of US CEOs (62%) are expecting global growth to decline over the next 12 months. Two years ago, the same record share of North America CEOs (63%) said the opposite, that the global economy would improve. On the other hand, the share of US CEOs making ‘no change’ to their operating model and growth strategy has actually grown by 51%, to one-third.

“Overall, we expect most regions to see a slowdown in growth due to weakened global sentiment. That said, we believe a global recession is unlikely. In particular, we remain optimistic about Asia, which has consistently demonstrated strong growth, almost double that of the Western world. Asian economies are also benefitting from supportive government policies to encourage regional cooperation and to promote growth,” added Jenny Sofian CEO of Fullerton Fund Management, Singapore.

The top concern in each region remains remarkably consistent with past years’ threats.

While North America CEOs still regard cyber threats as the leading threat to their organisation’s growth prospects, CEOs in Western Europe see overregulation again as a top threat for economic growth. Business leaders of Asia-Pacific are still seeimg trade conflicts as the leading threat to progress for their organizations, while leaders in Latin America, Africa and the Middle East, see populism, policy uncertainty and geopolitical uncertainty, respectively, as the top challenges in their region. 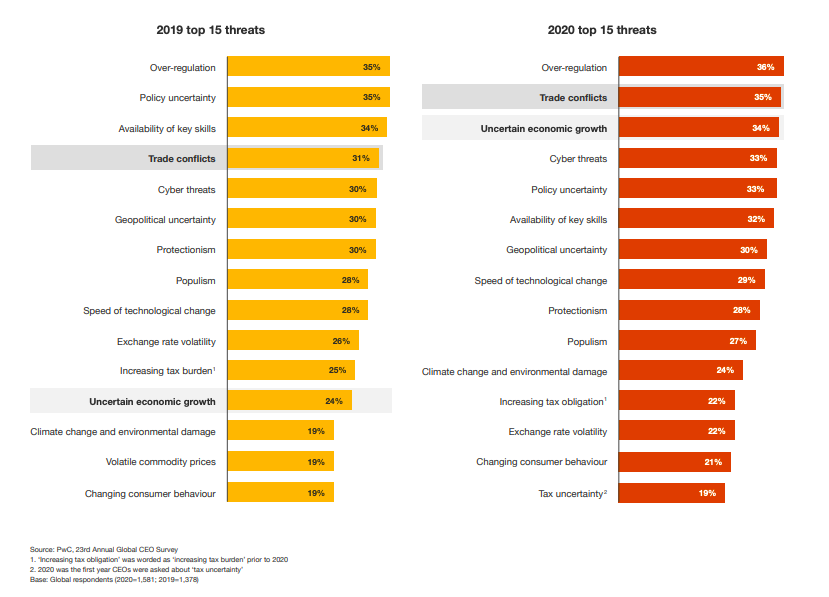 As CEOs look ahead to 2020, if there is one theme that rang out loudly in this year’s survey responses — and in business headlines — it was a heightened sense of uncertainty. And uncertainty weighs on growth.