The situation of the camera industry has drastically changed over the past decade.

Award-winning photographer Chase Jarvis once coined the phrase: “The best camera is the one that’s with you”.

This probably best describes the impact that smartphone cameras had and still have on the world of photography.

Always ready and in our pockets, smartphones, debuted in 2007 and 2008, posses a priceless advantage over digital cameras, plus,  the lenses and sensors built into mobile phones are getting better and better, harshly hitting the industry that was shipping almost 120 million digital cameras and probably didn’t worry too much about the upcoming competition.

Just last year, according to global camera shipments by CIPA (Camera & Imaging Products Association), its members dropped by more than 80% since peaking in 2010.

Recent smartphone developments have focused on improving image depth and performance in low-light conditions, both areas in which the difference between smartphones and dedicated cameras used to be most obvious, really spicing up the competition.

Will 2019 mean backlash for the industry or redemption for digital cameras? 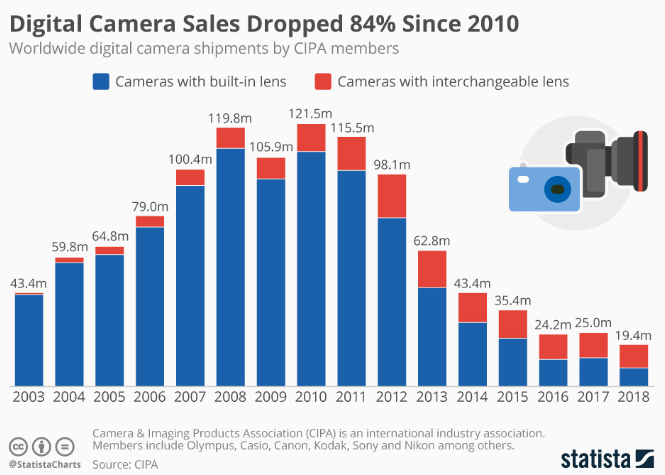