Internet users across the world are increasingly concerned about their online privacy.

Anyone in the world with Internet access instant access to an endless supply of knowledge and entertainment, but it also comes with a price.

Companies track our behavior online to serve advertisements. Governments, on the other hand, monitor our every move to predict behavior and apply control. And policy makers and technology-developers are finding it hard to keep up with the very creative ways of online danger, so, basically, the table is set to put our very on privacy at risk every time we browse through the web.

According to the Internet World Stats, there are now 4,383,810,342 Internet users in the world, and the penetration rate is 56.8 %, turning North America into the region with the highest Internet penetration (89.4%), and one of the most worried regarding online privacy.

Statista revealed the percent of Internet users increasingly concerned about online privacy due to internet companies, showing that in the Americas, United States (83%) and Mexico (77%) lead the ranking. In Europe, France (78%), Italy (78%) and Great Britain (76%) have the most worried Internet users. India (83%), China (76%) and Turkey (74%) highlight in Asia, while South Africa (84%) and Nigeria (75%) do so in Africa. 71% of web users in Australia feel concerned over online privacy.

Russia and Tunisia registered the lowest levels of concern among those countries surveyed.

An investigation by Accenture and Ponemon Institute also revealed that United States leads the list of the most affected countries by cybercrime, as 21.22 million are spent to resolve all types of cyber-attacks. 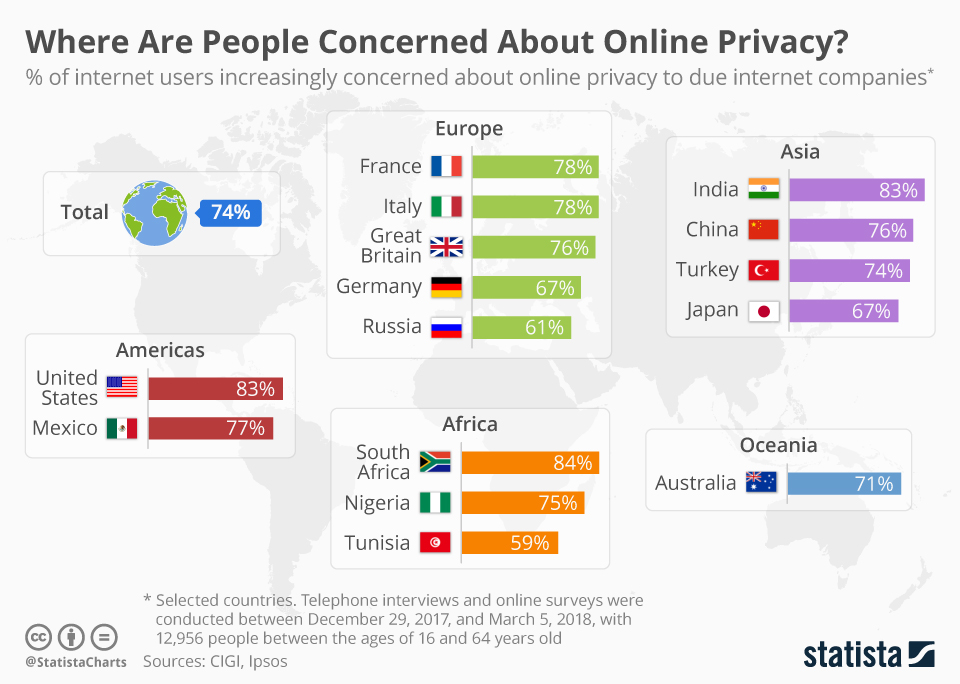 Since the beginning of the widespread use of the internet, IT experts had been looking for new ways to upgrade online security thus improving the overall effect of the online privacy, but a must-have method is far from being established as online privacy continues to redefine itself, meaning that trust is also hanging by a thread.

Companies and sites have become dramatically more pervasive in our lives with the evolution of tech innovations, but one thing is always worth remembering: not every online entity has our best interests at heart.

Disclosure of sensitive personal data such as credit card information or social security number, which can lead to stolen identities and financial damages, is the most common fear of internet users, quickly followed by malicious use of personal information intended to humiliate, harass or in other ways damage someone’s reputation, and government theft.

With U.S. residents already spending 10 hours a day in front of a screen of some kind and 1 in every 5 Americans saying they are online “almost constantly”, it seems clear where technology is taking its next big turn: It looks like the Internet’s next frontier could be confidence.

What can be done

The only way to truly opt out is to abandon all online interactions, which isn’t practical for most of us.

Fortunately, there are steps we can take to limit this ongoing incremental loss of privacy, click here to see the full recommendations via Forbes.

• Use a virtual private network (VPN) on both home-based and mobile devices.

• Turn off unnecessary tracking services that don’t provide you with direct benefits.

• Turn off location services on your phone unless using them for your own purposes.

• Delete unnecessary apps or deny them access to your location. Many apps will track you and feed this tracking data back to the profiling companies.

Will you chart a course on e-mobility or be left behind?