Results from the 10th edition of the Global wealth report published by Credit Suisse.

While wealth continues to expand for the rich, global inequality continues to reach out for the rest, which are the vast majority.

Information from a recent Credit Suisse report shows that the global millionaire population stood at 46.8 million in mid-2019, making the United States into the country with the most amount of millionaires in its population with an estimated 18.6 million people worth one million dollars plus after adding 675,000 newcomer millionaires over the past 12 months. 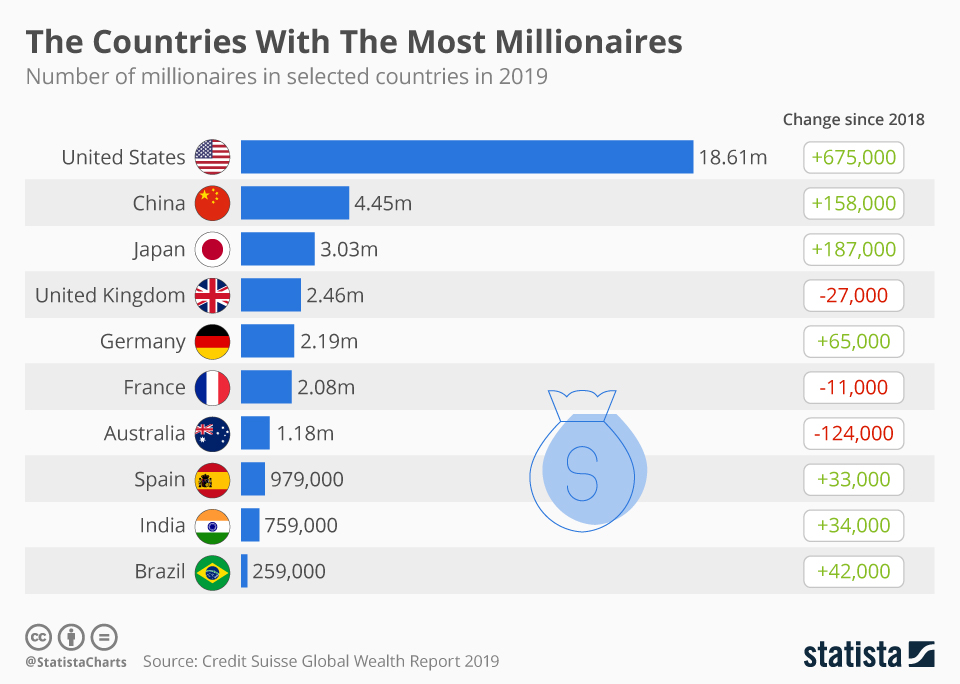 China reported the second highest millionaire population after growing by 158,000 since 2018, however, while it is topped by the U.S. in the amount of millionaires, it has gone over the U.S. for the first time in the number of “global wealthy,” defined as those in the top 10% of wealth in the world. Japan is third with 3.03 million and 187,000 newcomers, while the U.K., Germany, France, and Australia also presented growth in their millionaire population like Spain, India, and Brazil, although in a smaller amount. According to research from CNBC, the world’s 46.8 million millionaires are now worth a combined $158.3 trillion – or 44% of the world’s total wealth.

The growing amount of millionaires also comes with giant contrasts, as extreme inequality has had parallel peaks with rising fortunes. The reason that this gap has been widening is because governments are fueling the inequality crisis by under taxing corporations and wealthy individuals, yet chronic underfunding vital public services like healthcare and education, harshly affecting women, children, and the poor, who either suffer from a lack of healthcare coverage or clock up hours looking after sick relatives when healthcare systems fail.

For example, the United States, where most millionaires reside, contributed the most towards global wealth growth with USD 3.8 trillion, but still 2.5 million children experience homelessness in a year throughout the country, along with the 40 million Americans still experiencing poverty. Median household income was $63,179 in 2018, not statistically different from the 2017 median, despite that the number of full-time, year-round workers increased by 2.3 million between that same time, according to the U.S. Census Bureau.

China, on the other hand, has implemented policies to limit inequality, like raising the minimum wage and abolishing agricultural taxes, but inequality is still likely to rise further without additional policy changes, revealed Sonali Jain-Chandra on a chart on income inequality in China published on an IMF blog. Since 1978, China has seen four decades of rapid economic growth, but it has not been able to channel for changes of financial structure in order to influence income inequality among their citizens.

Japan, third on the rank of nations with most millionaires, was once known as the home of a strong middle-class in the affluent 1980s, but after severe cut backs on social services including healthcare and pensions, the nations has shifted into the same pattern of the rich getting richer, and the poorer getting notably poorer. All of this while Japan faces a major demographic crisis with young and old.

The U.K., ranked fourth, the IFS pointed out that of the major economies, the UK’s income inequality was exceeded only by the US, and had been kept in check because tax credits had been effective. And with inequalities in incomes and health, happiness is also showing signs of splintering. 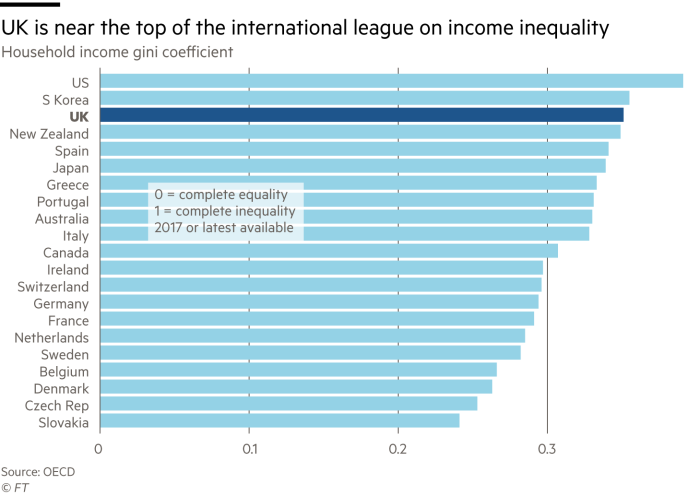 Inequality is not inevitable

Democrats of the 2020 Presidential Race are toying with a number of ideas to address economic inequality in the U.S., with candidates such as Sens. Bernie Sanders and Elizabeth Warren making it an integral part of their campaign messaging.

The numbers are harsh, they reflect true inequalities beyond imagination, but worst than all, the human cost of inequality is devastating: Students do not have teachers, the sick do not receive treatment. The fight against poverty and unequal circumstances must be stopped in order to evolve.

Click here for the Global wealth databook 2019 from Credit Suisse.