Crossovers dominate the list, but America’s best-selling luxury vehicle during 2018 is somewhat of a surprise.

Despite EVs accounting for a mere 1.12% of total vehicle sales and many doubting whether Tesla’s success can be sustained, the company has pulled through, producing 145,846 Model 3s in 2018, and selling an estimated 138,000 of them in the United States, making it the best-selling luxury vehicle in the United States during 2018.

Data from automotive magazine Car and Driver published by Yahoo! News put the Lexus RX as the runner up with 111,641 models sold, while the BMW 3 and 4 series came in third with sales totaling 75,957 vehicles.

Not a cheap car

Many observers have disagreed with pricing and the varying cost of electricity. Still, the pricing is moving in the right direction towards the unsubsidized $35,000 Tesla wants for the Model 3.

Competitors Porsche and Audi are still expected to launch new lines of electric vehicles this year, so the competition will be fierce. 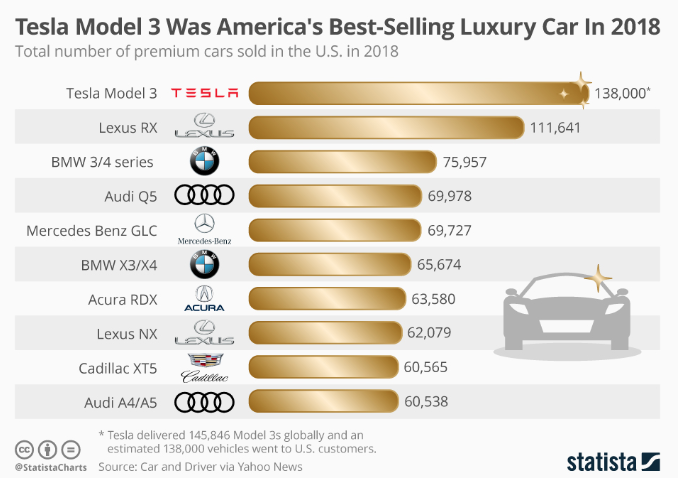