Music streaming platforms are becoming the stars for the music industry. 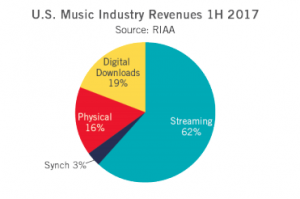 “We have the biggest distribution system in the world for streaming music, so why not use that to help young artists?”, Troy Carter, Spotify’s head of creator services, said to Billboard.

Few people have heard of Lauv, Russell Dickerson, or Trippie Red. In a couple of months, everyone will thanks to these platforms.

Those three musicians, chosen for the first round, will get prime placement in playlists and company promotional materials, TV ads, and special live events.

A star aspiration for Spotify

Carter added that Spotify wants to be “what MTV was” and “what HOT 97 was” for these indie acts and others to come. (The former gave generous play to videos from new artists and the latter is a New York hip-hop radio station; both have been vital in the ascent of many a music career.)

But Spotify is not alone: Apple Music and Deezer are on digital platforms too.

Streaming to the rescue

According to a mid-year report from the Recording Industry Association of America, the estimated retail revenues from recorded music rose 17% in the first half of 2017, with revenue from music streaming sites accounting for 62% of the total market.

Seeing this trend continue to grow, it seems music streaming services are finally offering some hope for the recorded music industry.