As diversity has proven to strengthen financial outperformance among executive teams, studies show that taking a closer look at the winners can unveil new ways of progress.

Diversity wins is the third report in a McKinsey series investigating the business case for diversity, following Why diversity matters (2015) and Delivering through diversity (2018). Our latest report shows not only that the business case remains robust but also that the relationship between diversity on executive teams and the likelihood of financial outperformance has strengthened over time. These findings emerge from our largest data set so far, encompassing 15 countries and more than 1,000 large companies. By incorporating a “social listening” analysis of employee sentiment in online reviews, the report also provides new insights into how inclusion matters. It shows that companies should pay much greater attention to inclusion, even when they are relatively diverse.

By following the trajectories of hundreds of companies in our data set since 2014, we find that the overall slow growth in diversity often observed in fact masks a growing polarization among these organizations. While most have made little progress, are stalled or even slipping backward, some are making impressive gains in diversity, particularly in executive teams. We show that these diversity winners are adopting systematic, business-led approaches to inclusion and diversity (I&D). And, with a special focus on inclusion, we highlight the areas where companies should take far bolder action to create a long-lasting inclusive culture and to promote inclusive behavior.

(Our research predates the outbreak of the global pandemic, but we believe these findings remain highly relevant. See the sidebar, “In the COVID-19 crisis, inclusion and diversity matter more than ever,” for more on why I&D must remain a priority even as the context shifts, or read “Diversity still matters” for an even deeper dive.)

A stronger business case for diversity, but slow progress overall

Our latest analysis reaffirms the strong business case for both gender diversity and ethnic and cultural diversity in corporate leadership—and shows that this business case continues to strengthen. The most diverse companies are now more likely than ever to outperform less diverse peers on profitability. 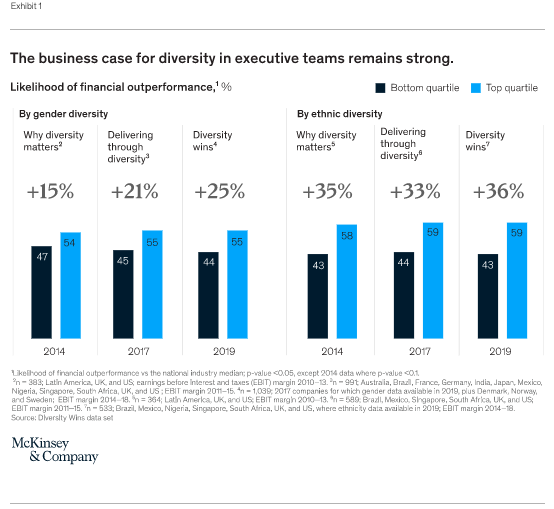 Moreover, we found that the greater the representation, the higher the likelihood of outperformance. Companies with more than 30 percent women executives were more likely to outperform companies where this percentage ranged from 10 to 30, and in turn these companies were more likely to outperform those with even fewer women executives, or none at all. A substantial differential likelihood of outperformance—48 percent—separates the most from the least gender-diverse companies.

In the case of ethnic and cultural diversity, our business-case findings are equally compelling: in 2019, top-quartile companies outperformed those in the fourth one by 36 percent in profitability, slightly up from 33 percent in 2017 and 35 percent in 2014. As we have previously found, the likelihood of outperformance continues to be higher for diversity in ethnicity than for gender. 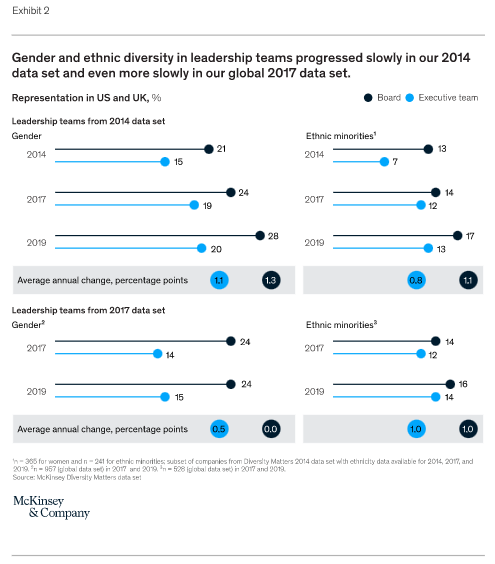 While overall progress on gender and cultural representation has been slow, this is not consistent across all organizations. Our research clearly shows that there is a widening gap between I&D leaders and companies that have yet to embrace diversity. A third of the companies we analyzed have achieved real gains in top-team diversity over the five-year period. But most have made little or no progress, and some have even gone backward.

This growing polarization between high and low performers is reflected in an increased likelihood of a performance penalty. In 2019, fourth-quartile companies for gender diversity on executive teams were 19 percent more likely than companies in the other three quartiles to underperform on profitability—up from 15 percent in 2017 and 9 percent in 2015. At companies in the fourth quartile for both gender and ethnic diversity, the penalty was even steeper in 2019: they were 27 percent more likely to underperform on profitability than all other companies in our data set.

We sought to understand how companies in our original 2014 data set have been progressing, and in doing so we identified five cohorts. These were based on their starting points and speed of progress on executive team gender representation and, separately, ethnic-minority representation (Exhibit 3). In the first two cohorts, Diversity Leaders and Fast Movers, diverse representation improved strongly over the past five years: for example, gender Fast Movers have almost quadrupled the representation of women on executive teams, to 27 percent, in 2019; for ethnicity, companies in the equivalent cohort have increased their level of diversity from just 1 percent in 2014 to 18 percent in 2019. 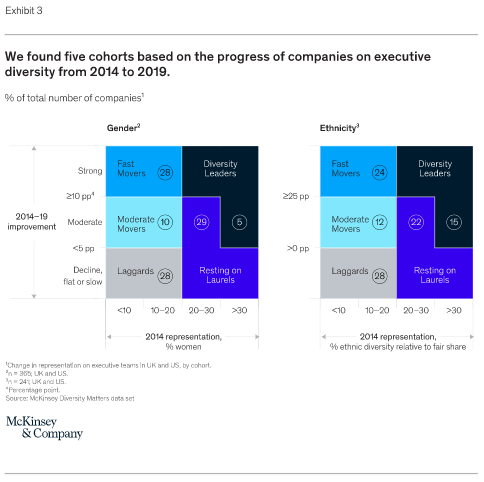 At the other end of the spectrum, the already poor diversity performance of the Laggards has declined further. In 2019, an average of 8 percent of executive team members at these companies were female—and they had no ethnic-minority representation at all. The two other cohorts are Moderate Movers, which have on average experienced a slower improvement in diversity, and Resting on Laurels, which started with higher levels of diversity than Laggards did, but have similarly become less diverse since 2014.

We also found that the average likelihood of financial outperformance in these cohorts is consistent with our findings in the quartile analysis above. For example, in 2019, companies in the Resting on Laurels cohort on average had the highest likelihood of outperformance on profitability, at almost 62 percent—likely reflecting their historically high levels of diversity on executive teams. Laggards, on the other hand, are more likely to underperform their national industry median in profitability, at 40 percent.

By analyzing surveys and company research, we explored how different approaches to I&D could have shaped the trajectories of the companies in our data set. Our work suggested two critical factors: a systematic business-led approach to I&D, and bold action on inclusion. On the former we have previously advocated for an I&D approach based on a robust business case tailored to the needs of individual companies, evidenced-based targets, and core-business leadership accountability.

To further understand how inclusion matters—and which aspects of it employees regard as significant—we conducted our first analysis of inclusion-related indicators. We conducted this outside-in using “social listening,” focusing on sentiment in employee reviews of their employers posted on US-based online platforms.

While this approach is indicative, rather than conclusive, it could provide a more candid read on inclusion than internal employee-satisfaction surveys do—and makes it possible to analyze data across dozens of companies rapidly and simultaneously. We focused on three industries with the highest levels of executive-team diversity in our data set: financial services, technology, and healthcare. In these sectors, comments directly pertaining to I&D accounted for around one-third of total comments made, suggesting that this topic is high on employees’ minds.

We analyzed comments relating to five indicators. The first two—diverse representation and leadership accountability for I&D—are evidence of a systematic approach to I&D. The other three—equality, openness, and belonging—are core components of inclusion. For several of these indicators, our findings suggest “pain points” in the experience of employees: 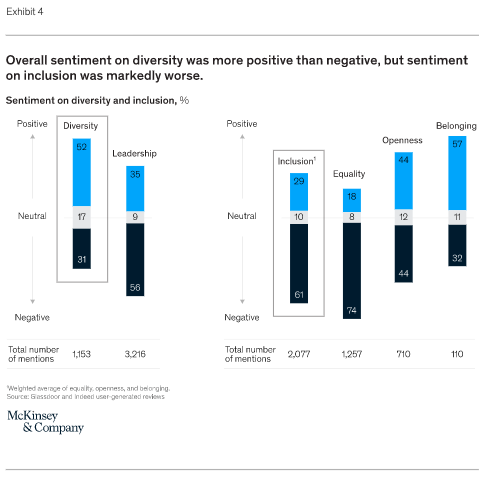 These findings highlight the importance not just of inclusion overall but also of specific aspects of inclusion. Even relatively diverse companies face significant challenges in creating work environments characterized by inclusive leadership and accountability among managers, equality and fairness of opportunity, and openness and freedom from bias and discrimination.

We took a close look at our data set’s more diverse companies, which as we have seen are more likely to outperform financially. The common thread for these diversity leaders is a systematic approach and bold steps to strengthen inclusion. Drawing on best practices from these companies, this report highlights five areas of action (Exhibit 5): 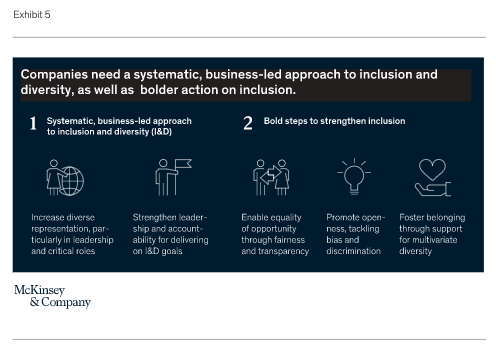