eMarketer studied the average time spent with digital and traditional media among Canadians.

eMarketer article by Amy He

Average time spent with digital media surpasses that of traditional media and digital ad spending has finally caught up with the changing way in which Canadians are consuming media.

We estimate that consumers in Canada will spend 9 hours, 50 minutes (9:50) per day on media this year, with 4:55 of that time spent on digital and 4:54 spent on traditional. 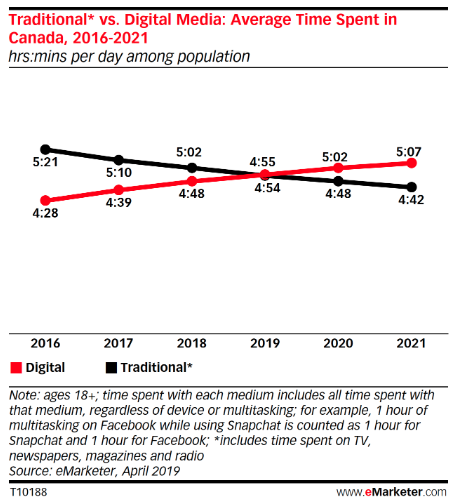 “Digital ad formats are now being embraced in Canada because they’ve matured dramatically in the past few years,” eMarketer senior analyst Paul Briggs said. “Compared with traditional formats, the granular reporting and behavior tracking of digital ads are much more specific in assessing how well an advertiser is engaging a consumer.”

In turn, this overspending in digital ads is causing an imbalance in the way ad dollars are being spent on legacy media. This year, TV ad spending will make up 20.6% of all ad spending, even though 31.3% of Canadian consumers are spending their time with TV. Radio ad spending makes up 10.0%, even though the time spent share is 15.2%. 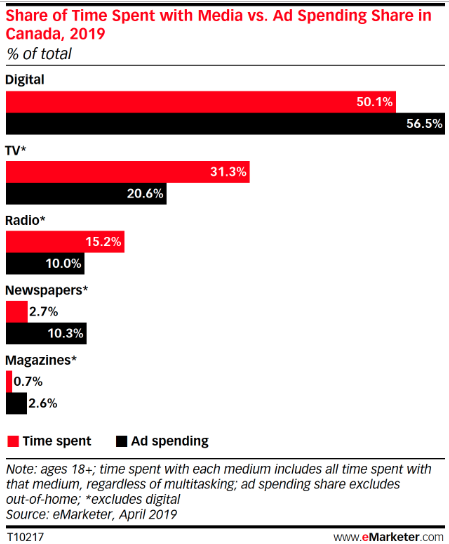 The biggest imbalance comes from print: 12.9% of ad dollars go to print, even though consumers are spending just 3.5% of their time with the medium. This disparity can be attributed partly to the way public policy in Canada supports the print industry at a time when digital competition erodes away at the viability of traditional news media.

In November 2018, the federal government announced a CA$600 million five-year plan to fund the industry, mainly in the form of tax breaks on the employment of journalists.

“Some advertisers still value print because readers tend to be older and more affluent,” Briggs said. “But print ad spending has cratered in comparison with all other formats—it’s about half of what it was five years ago. It will continue this decline to bring it into balance with actual time spent figures.”

Has overall media time in Canada reached a saturation point?

It has. At almost 10 hours daily—or 41% of the hours in the day, to be precise—consumers’ media plates are full. This follows a decade when digital formats increased access to media and multitasking, driving total media time to new heights.

Mobile now makes up almost a third of all media time—on par with TV, although time spent with traditional media (TV, radio and print) is declining.

For further breakdowns on how Canadian consumers are spending their time with media, click here for the complete eMarketer Report Collection.