Knowledge (of self) is power

As sophisticated technology boosts, we can see the Big Data revolution is not just impacting the way companies, it’s helping us lead healthier, more informed lives.

Mauricio Maille is a 52-year-old amateur cyclist. He enrolled in the Giro de Italia Stage Mexico and pedaled 90 miles (140 km) with many slopes. He completed the trip in just over five hours and ended up exhausted, in fact just over half of the route sent a video where he confesses surrendering with still 37.5 miles (60 km) left. The competitors of the Tour de France run every day an average 140 miles (200 km) and only rest two days out of 21 which lasts the strongest test that any cyclist can roll. At the end of the competition, the sport’s bracelet worn by Mauricio recommended a six-day break.

It’s a fair bet sir Francis did not anticipate the advent of the information society we find ourselves in this century, where terabytes of data are constantly flowing via digital media to influence, measure and help along decision-making and industrial processes into an upcoming age of automation.

But he and many others were aware of the benefits of the knowledge of self, and the growing trend of health and performance-oriented wearable devices is also using the Big Data revolution to enable people to understand more about their own habits and health and make more informed decisions about their lives and performance, at the gym and at work.

A way to boost fitness practices

Runners, for example, can simplify flick their wrist on the fly to ensure they are staying within their optimal heart rate to improve conditioning, and increasingly these devices can automatically identify if someone is cycling, training in the gym or just talking a relaxing afternoon stroll with the dog. People in a diet can keep close watch of their weight meals and calories burnt to achieve better success on their weight-loss efforts.

Some devices, such as Apple’s iWatch, Huawei Fit band and Samsung Gear act as bridges between people and their smartphones while incorporating fitness tracker capabilities, while others such as those made my market leader Fitbit and Xiaomi focus more on keeping abreast of one’s current health condition and even offer reminders to get off the chair every now and then for disk-jockeys.

Devices helping people determine their heart rate can aid in detecting conditions related to stress, among others, while those measuring the depth and continuity of sleep patterns can point to worrying trends and provide tools for users to get help with their resting habits. Others on the pipeline might eventually aid users with life-threatening conditions such as diabetes keep their treatment up to date. Doctor could eventually bene t from the stream of data these devices provide to design more effective, tailored treatments for each of their patients.

They also offer users rewards and even the chance to banter with friends. Users can compare their activities with others on their networks and challenge each other to a number of training sessions, steps on a period or the like, something that a growing number of companies are turning into team building efforts and to help draw their employees attention toward healthier choices.

The Medical Daily magazine reported last year on companies offering to pay for part of their employees devices. “The catch? They have to meet daily exercise goals for two years or they’ll end up paying the difference,” it said.

According to eMarketer’s latest wearables forecast, 8.2 million Americans age 55 and older will use a wearable device in 2019, that’s up more than 15% over this year.

This trend will turn Americans 55 and older into the fastest-growing group of electronic wearable users inside the United States, despite it only represents a small share of users, it holds the highest growth rate among all age groups due to faster-than-expected adoption of wearable devices. 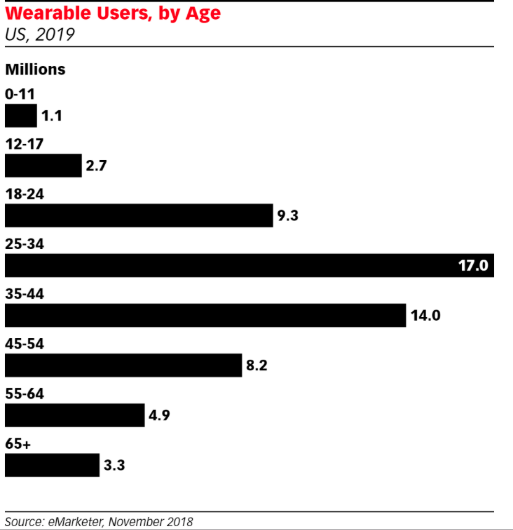 Although adoption of this technology is on the rise, it is a market still waiting to catch the mainstream wave.

eMarketer forecasting analyst Cindy Liu explained some of the trends wearables will face next year: