The world changed in March 2020 and thrust the global economy onto a new trajectory. Understanding EY Megatrends can help you make the right strategic choices.

The COVID-19 pandemic has strained health care systems to breaking point, put much of the global economy on an indefinite hiatus and radically reshaped societal norms and interactions. Trends that seemed far off suddenly arrived, undermining established assumptions and leaving leaders scrambling to formulate business models and approaches that address a very different economic, social and political environment.

So, how do you make sense of this emerging reality? We have long advised that disruption does not come from technologies and business models alone; it can equally be unleashed by elections, climate disruption or, in this case, a pandemic. The EY Megatrends approach seeks to provide an organizing framework, allowing you to formulate strategy by looking far beyond your traditional sector and legacy competitors to help identify potential threats and opportunities.

This year, such an approach is more important than ever. By understanding the forces shifting the world’s tectonic plates, leaders can take an approach that works back from a vision of the future to create scenarios for growth beyond the COVID-19 pandemic, using them to set an action agenda today. In short, EY Megatrends can help you reframe the future of your organization and build competitive advantage in a better post-pandemic world.

Understanding where we are today requires understanding where we’ve been. Since the Second World War, the global economy had, generally speaking, been on an S-shaped growth curve based on a decades-long wave of globalization, information-technology adoption and resource extraction. Success meant creating value based on ever larger scope, scale and efficiency, and striving for global market leadership. This established long-term and defendable competitive advantages. But as the system matured and growth waned, a global economy built on unfettered “take-make-waste” production delivered increasingly unsustainable societal, environmental and business outcomes.

The pandemic abruptly accelerated the transition to a new S-curve. It has moved us, almost overnight, into a new renaissance or a global reset — making possible what was once unthinkable. Remote working has become widespread, with employees equally or more productive, and companies now considering eliminating corporate headquarters. The future of campus-based education is being weighed after an abrupt shift to virtual learning. Changes that had been sporadic or resisted have been implemented by necessity, suddenly proving more effective and sustainable. Many will likely endure.

Yet, the pandemic has also exposed the fault lines of economic inequality, highlighting we are all made more vulnerable by weaknesses in social safety nets. This could catalyze trends we have been discussing for some time — populism, renewed social contracts, long-term value and new economic metrics — and accelerate the move along the new S-curve. That’s why, for business leaders, now is the time to question the merit of seemingly positive short-term actions that yield poor long-term outcomes. A better baseline has become thinkable.

Using megatrends to widen your frame

This new S-curve has been visible for a while now, albeit in the form of long-term trends that lay over a distant horizon. It’s the future described in EY Megatrends reports, where social contracts are rewritten to be more inclusive and sustainable, compelling businesses to take a more proactive role in creating long-term value. A future where the global system is reshaped by everything from shifting power dynamics to 3D printing. Where human augmentation technologies such as artificial intelligence and the internet of things transform every human domain, from consumer behavior to the nature of work.

All of which is to say: we’re not in entirely uncharted territory. In fact, some companies have in recent years become market value leaders by operating by the rules of the new S-curve. They’ve been labeled disruptors or “unicorns,” making them sound rare and almost mythical. In the new normal, though, they’re anything but — every company will revamp its strategy and approach to operate by the rules of the new reality.

So, how do you use the EY Megatrends framework? First, it generates a potentially countless collection of megatrends, since the evolution of primary forces continuously creates new ones. This helps you identify other megatrends based on the primary forces. Design thinking and design-based innovation can blend creativity and analysis in this process. Environments built on these principles, such as EY wavespace™ facilities, allow executives to experience the art of the possible in an immersive way. 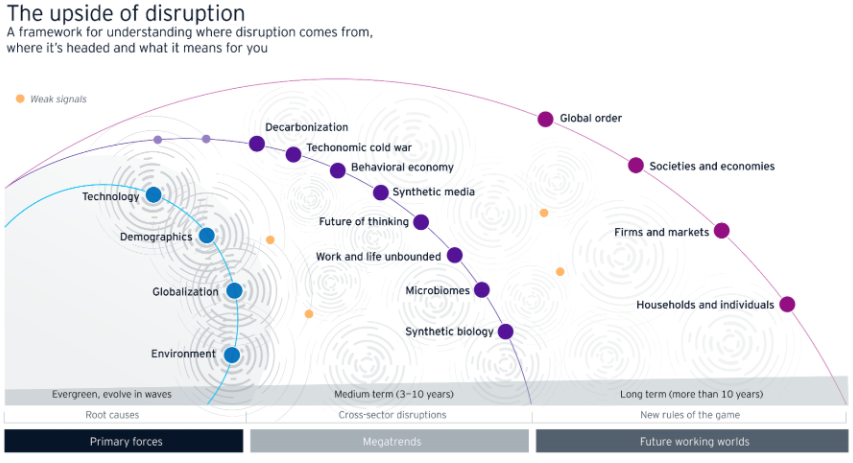 EY Megatrends also challenge an assumption companies often make that results in major strategic risk: developing plans assuming today’s industry structure, competitors and profit pools will persist through a 5- to 10-year planning horizon. Megatrends expose teams to trends and forces far outside their usual scope of analysis, reducing the risk of “missing the next big thing.”

The EY Megatrends framework distinguishes between different types of forces, allowing you to prioritize those that are relatively near-term, while monitoring others that are further out (such as weak forces). This enables you to invest resources more efficiently, while keeping a watchful eye on trends that might require investment at a future date.

Organizations will thrive in the post-pandemic world by putting humans at center, deploying technology at speed and innovating at scale. Being human-centric allows you to develop workplaces and market offerings that resonate with workers and consumers. Deploying technology faster is critical in an environment where accelerated technology adoption is reinventing everything from education to work to health care. And the better you can adopt a dual mindset to simultaneously plan for a disruptive future while delivering today, the more adept you’ll be at pivoting on the fly and getting your product to market at the scale required.

But just how do you do it? For leaders facing disruption, that’s the challenge: akin to rebuilding a Formula One car not in pit lane, but as you hurtle around the track. We’re in the middle of the greatest global disruption in modern history. Thriving in this new environment — placing humans at the center, leveraging technologies with greater speed and quickly scaling innovation — requires future-back planning. Megatrends scenarios are critical to this: formulating strategy based on how the future will be reframed will determine which companies use the pandemic to foster a renaissance — and which risk irrelevance.

This future-back method flips the script on the standard approach, which use the current state as the starting point. It’s particularly suited to disruption — and even more to the disruption of COVID-19 — which makes extrapolation based on historical trends meaningless by creating entirely new markets and ecosystems. Future-back thinking broadens the perspective of executives, helping to confront the reality of potential futures where the company could become irrelevant or the industry itself totally redefined.

The COVID­-19 pandemic accelerated global megatrends, pushing the world onto a new S-curve of growth. This global reset created an opening for change that seemed unthinkable a few months ago, including the opportunity to shape the post-pandemic world for the better. EY Megatrends provide leaders with a framework for navigating this unprecedented change and charting future growth. It’s by taking a future-back approach connecting megatrends-based scenarios with concrete strategic actions that companies can position themselves today for long-term success.

By exploring “What’s after what’s next?”, EYQ helps leaders anticipate the forces shaping our future — empowering them to seize the upside of disruption and build a better working world.