OECD showed the average annual hours worked per worker in 2017 in selected countries, ranking Mexico at the top.

Much like attitudes towards labor have changed over time and place, the current culture around working hours change based on where in the world a worker is employed.

Average annual hours worked is defined as the total number of hours actually worked per year divided by the average number of people in employment per year.

The global ranking (in selected countries)

According to OECD, in Mexico, the average worker works the most hours a year, putting in over 2,200 hours of labor, becoming the nation were workers put the most amount of hours into work.

South Korea comes in second with slightly over 2,000 hours of work per year, followed by Russia, Greece and Chile. The United States is just 34 hours above the OECD average, which is 1,746.

The average German worker enjoys around 1,356 average annual hours of work, 390 hours below the OECD average. 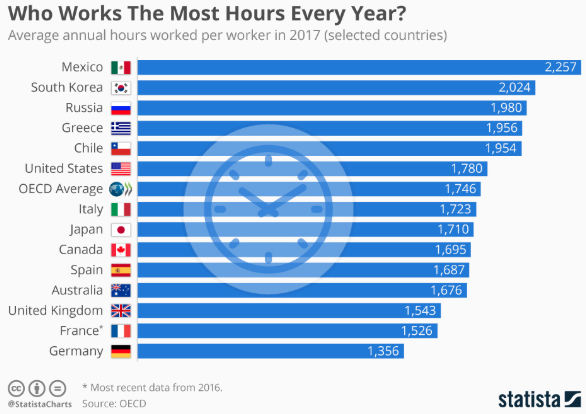