Shares of the largest American automakers dropped on Friday as President Trump set his sights on illegal immigration.

President Donald Trump delivered the latest blow in the war versus automakers, saying he’s planning to impose a 5% tariff on all goods coming into U.S. soil from Mexico, adding that the tariff would gradually increase “until the illegal immigration problem is remedied.”

Despite the fact that tariffs will be placed on “all goods”, the auto industry is expected to be hit hardest, because if they escalate to the 25% cap Donald Trump has proposed, it could wipe out about $17 billion of market value from the world’s biggest automakers, notably the “big three”. This damage could cost General Motors over $6.3 billion, Fiat Chrysler $4.8 billion, and Ford $3.3 billion, according to a Deutsche Bank estimate.

These tariffs could force automakers into a big decision: Either they absorb the added cost, or they pass it on to consumer. Michelle Krebs, executive analyst at Cox Automotive’s Autotrader told The Verge that since profit margins are already thin in the auto industry, it’s quite unlikely that automakers will eat the full cost if the tariffs go into effect, meaning that the prices of cars will go up, and sales could go down.

Data from Deutsche Bank shows that GM, Chrysler and Ford import 29, 24 and 17% respectively of the components of its cars and trucks from Mexico, plus a double-digit portion of finished cars. Deutsche Bank’s estimates reveal that prices could be hiked by between $1,600 and $2,400 per vehicle.

American carmakers wouldn’t be the only ones hurt by the tariffs however, as virtually every major player in the industry produces cars for the US market in Mexico.

Mexico is the US’ largest trading partner, surpassing Canada.

As of last year, the U.S. imported $372 billion worth of products from Mexico, according to government trade data. The top categories were cars and car parts, most of them designed by American automakers. The U.S. also relies heavily on Mexico for machinery, furniture and produce.

Second to cars is tech equipment, including $26 billion of computers and computer parts, semiconductors and software

“The bottom line is this threat hurts the U.S. economy via consumer spending getting hit”, said Jack McIntyre, portfolio manager at Brandywine Global, while Oxford Economics cited a “significant risk to business activity both north and south of the border.” 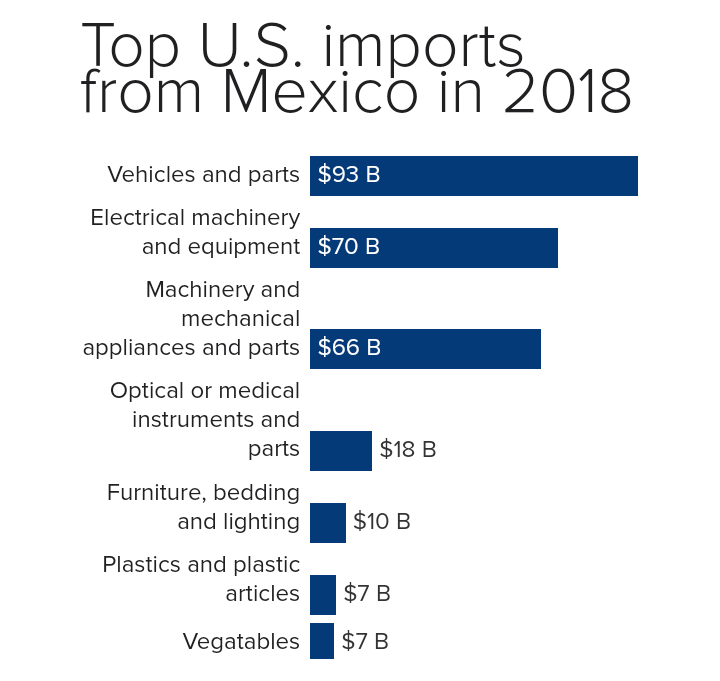 How can net zero in chemicals be profitable?

Three signals for Canadian insurers to go big in the cloud

How personalizing sustainable investments can shape the future of finance

Experts say QR codes at restaurants are no fad