The Millennial and GenZ part

Amid accelerated transformations everyday, Millennials and Gen Zs are feeling unsettled about the future. This is how they play a part in the fast world of today.

As America’s first generation of true ‘digital-natives’ is taking the markets by storm, and millennials become of age and shift industries and trends alike, it’s interesting to see how these generations play a part in the world they live in.

According to Deloitte’s 8th annual Millennial Survey, despite current global economic growth, expansion, and opportunity in markets around them, Millennials and Generation Z, America’s most diverse to-date (first to be majority non-white)”, are expressing uneasiness and pessimism about their careers, their lives, the economy, and the world around them: their countries’ social/political situations, and institutions like government and he media.

2019 has been a year where deterioration of optimism and a wide variety of both macroeconomic and day-to-day anxieties weighing on millennials’ minds has become palpable. A recent study by Mind Share Partners, Qualtrics and SAP reveals that half of millennials and 75% of Gen Zers have left a job for mental health reasons since last year, now, younger people are dealing with a mental illness at about three times the rate of the general population.

Business-wise, millennials’ opinions continue to diminish, in part due to views that businesses focus solely on their own agendas rather than considering the consequences for society. 55% of Deloitte’s responders said business has a positive impact on society, down from 61% in 2018. More millennials than ever—49%—would, if they had a choice, quit their current jobs in the next two years. Conversely, these younger generations will not hesitate to lessen or end a consumer relationship when they disagree with a company’s business practices, values, or political leanings, seeming that organizations that can make the future brighter for millennials and Gen Zs stand to have the brightest futures themselves.

In the macroeconomic spectre, both generations have expressed bleak expectations for the economy—the lowest we have experienced since we began asking this question six years ago. Trust in traditional media also is notably low among millennials and Gen Zs as is opinions of political and religious leaders.

Personal life: The value of experiences over hedonism

The youngest generations are no less ambitious than their predecessors; more than half want to earn high salaries and be wealthy. But their priorities have shifted. Travel and seeing the world was at the top of millennials’ list of aspirations (57%), while slightly fewer than half said they wanted to own a home (49%).

They also were more attracted to making a positive impact in their communities or society at large (46%) than in having children and starting families (39%). Generally, millennials think their ambitions are achievable. But for many, their dreams have been delayed by financial or other constraints.

When it comes to work, millennials have become health-conscious workaholics who prefer authentic human interaction and natural highs over boozy dance parties and hedonism. They are consuming just as much alcohol as older generations, but in greater moderation and with a more diverse palate. In the Gen Z arena, brands that win this generation over achieve it because of their ability to convince young adults of their coolness and momentum.

Millennial parents are changing the way they raise their children compared to previous generations, and as companies have heavily targeted millennials across the globe during the last decade, a shift may be needed. Companies need to study and understand the changing family dynamics and households to ensure that the entire new family model is being targeted, instead of focusing solely on individuals within young family households.

This habit shift means businesses need to ensure that this thirst for experiences is being used to their advantage.

Younger generations embrace technology and understand its benefits; Deloitte’s 8th annual Millennial Survey states that 71% feel positive about their personal use of digital devices and social media. But more than half said, on balance, that social media does more harm than good. Nearly two-thirds (64%) of millennials said they would be physically healthier if they reduced the time they spent on social media, and 6-in-10 said it would likely make them happier people.

Cybersecurity concerns also loom large. Only 14% of millennials strongly agree that the benefits of technology outweigh the risks associated with sharing personal data, 79% are concerned they’ll be victims of online fraud, and a quarter of millennials have curtailed consumer relationships because of companies’ inability to protect data.

The how behind millennial and GenZ sentiment

Deloitte’s 8th annual Millennial Survey states that income inequality and the lack of social mobility were likely factors driving economic pessimism among both generations, highlighting the negative impact of an uncertain, unequal environment. Political conversations have also likely contributed to increased skepticism. And consistent with past surveys, millennials expressed low opinions of political and religious leaders— signaling that something must change in order to win over this key cohort. 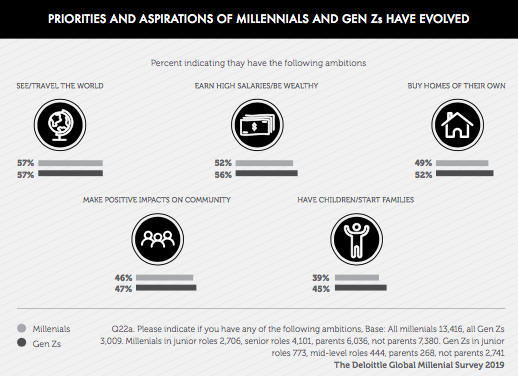 COVID has pushed millions of children into ‘learning poverty’: WEF

America’s worst places to live in 2022

America’s best places to live in 2022