The younger the shopper, the more likely they will embrace retail technology, right? Not necessarily.

While recent data reveals big differences in attitudes toward a range of shopping-related technologies, there are some noteworthy exceptions.

Younger consumers lead the way in shopping with a mobile device. About 75% of Gen Z and millennials use smartphones to shop online—more than any other generation—according to an Epsilon survey of 3,000 US individuals.

Similar findings came from GfK’s latest annual FutureBuy study. The report found that 73% of Gen Y consumers (ages 19 to 28) reported using a smartphone for shopping within the past six months, while the figure for boomers (ages 54 to 72) was just 33%. Gen X (ages 39 to 53) was closer to the middle at 59%.

Yet these cross-generational attitudes and behaviors are not always so clear-cut. For example, Epsilon’s research shows that while millennials are more likely to shop online from a smartphone, Gen Z consumers—just like older generations—prefer to shop in-store. Millennials generally prefer shopping online for the shipping convenience, whereas Gen Z prefers in-store shopping for purchase speed and the social aspect of shopping with friends, the survey found.

Other technologies barely show a generational divide. With regard to mobile payments, for example, GfK’s study found a strikingly similar level of concern about sharing personal information: Only a four-point spread was found between the most and least worried groups (boomers, 61% vs. Gen Z, 57%).

“For all the bluster about doing away with credit cards or cash, mobile payment uptake in the US has remained at low levels of adoption for quite some time,” notes Joe Beier, executive vice president of GfK Shopper and Consumer Insights. “People agree that mobile is—or at least should be—a faster and easier payment method. But there are lingering data security concerns that the marketplace has yet to fully address or alleviate.” 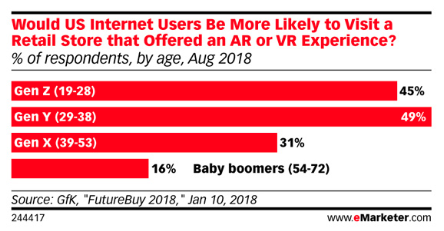 GfK found that roughly equal numbers of Gen Z (45%) and Gen Y (49%) respondents—but only 31% of Gen X and 16% of boomers—agreed with the statement, “I would be more likely to visit a retail store that offered an [augmented or virtual reality] experience.” And Epsilon found that only 3% of consumers use digital voice assistants to order online—mainly Gen Z, millennials and Gen X.

Inflation is the world’s biggest worry, according to a new poll