With climate change increasingly becoming a matter of concern for employees and environmentalists alike, companies can no longer ignore the issue. This primer from Deloitte serves as an FAQ for decision-makers to take stock of the climate change situation and make the right business decisions around it.

Addressing climate change has moved steadily higher on the corporate agenda. Even as more of the business community acknowledges the fundamentals—that the emission of greenhouse gases by humans is changing the climate in ways that are harmful to the planet and human societies—many also struggle to go beyond those basics. How harmful, exactly? How quickly must we act, and at what scale?

This primer aims to equip busy leaders with climate change knowledge so they can ask the right questions, prioritize the right areas, and make the right decisions.

If you’re already well on your way to addressing climate change in your own organization, great! We hope this primer helps you discover new, factual information that you’ll find useful. If you haven’t started to address your carbon emissions yet, this primer serves as your FAQ guide to go from awareness to action.

What is climate change and why is it happening?

Human actions, primarily burning fossil fuels but also deforestation and other activities, have resulted in a rapid increase in the concentration of greenhouse gases (GHG) in the atmosphere. GHGs, including carbon dioxide, methane, and nitrous oxide, trap heat close to the surface and cause global temperatures to rise. Since the industrial revolution, carbon dioxide concentrations have risen by more than 30%—currently 414 parts per million (ppm), up from 180–300 ppm historically (pre-industrial era). The result has been a global temperature increase of approximately 0.2 C per decade; today, mean surface temperatures are approximately 1.0 C (1.8 F) warmer than the pre-industrial period. 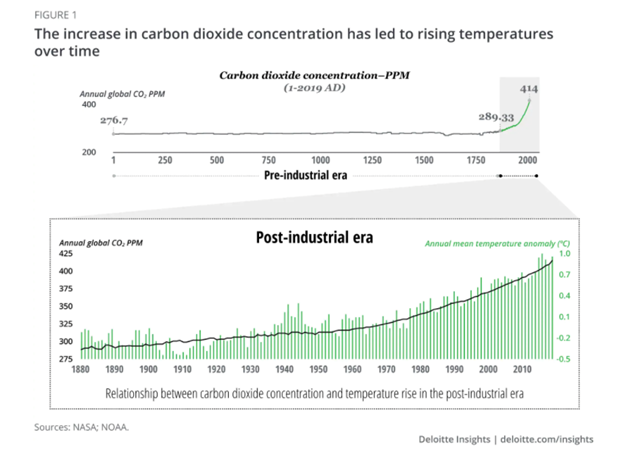 How sure are scientists about climate change?

Modeling the climate is highly complex, requiring an understanding of the interactions and feedback processes likely to occur across a wide range of Earth systems. Adding to the challenge, to the best of our knowledge, never before in the Earth’s history have carbon dioxide increases and attendant warming occurred as quickly as what we are experiencing today; we are truly in uncharted waters. Nevertheless, scientists’ climate models have been remarkably accurate at predicting global temperature rise (figure 2). Beyond temperature changes, scientists’ estimates have more often underestimated the speed and severity of the impacts of a changing climate (e.g., the melting of ice sheets). A range of climate tipping points that would create abrupt and irreversible changes—from the rapid collapse of ice sheets to permafrost thawing to the disruption of critical ocean currents—once thought to be extremely unlikely or only possible with a much warmer planet are now seen by many scientists as “too risky to bet against.”

Is it a big deal if temperatures are a few degrees warmer?

Climate change is already affecting many of the Earth’s natural systems. The frequency and severity of natural disasters—floods, hurricanes, fires, droughts, and more—are increasing and can be directly linked to this global phenomenon. Climate change is already happening. It also contributes to desertification, sea-level rise, ocean acidification, reduced air quality, rain pattern shifts, and loss of biodiversity. All of these changes can impact economies and human society in profound ways. Climate change is already a factor in more than 150,000 deaths annually across the globe, and it could create 143 million migrants by 2050. From 1980 to 2019, there was a fivefold increase in billion-dollar weather events in the United States.

Warmer, higher oceans and threats to cities: The oceans absorb excess carbon dioxide. Rising carbon dioxide concentrations lead to ocean acidification, which itself leads to the loss of ocean biodiversity. Higher surface water temperatures—which hit a record in 2019—result in oceans and other water bodies absorbing excess carbon dioxide. The thermal expansion of seawater erodes ice sheets and glaciers, contributing to further sea rise. Global sea levels rose about 8 inches in the last century. Predictions include a 0.46m rise in sea levels by 2100 (relative to 1986–2005 at 2 C warming). Rising seas put low-lying areas at risk and are a serious threat to cities and urban centers around the globe. Increased flooding seems guaranteed. Some cases may even result in environmental reclamation and total loss. Close to 150 million people across approximately 60,000 square kilometers of land area, and at least 136 megacities across the globe (such as New York City, Miami, Jakarta, and Mumbai) are at risk due to sea-level rise (at 2 C warming). The global economic costs just to cities from rising seas and flooding are predicted to amount to US$1 trillion over the next 30 years.

Read the full article at https://www2.deloitte.com/us/en/insights/topics/strategy/economic-impact-climate-change.html

Steel Imports Down 23% In February vs. January

Energy Fact Sheet: Why Does Russian Oil and Gas Matter?

Conference Board: US Consumer Confidence Up Slightly