Top US cities for clean energy

The Non-Profit American Council for an Energy-Efficient Economy has revealed the US cites with the highest score for clean energy usage & efficiency.

The Non-Profit American Council for an Energy-Efficient Economy has released its 2019 City Clean Energy Scorecard, which details the level of progress US cities are making in clean energy adoption. It tracked renewable energy policy efforts, efficiency and per- formance across 50 metrics in 75 large American cities, finding that only 11 are on pace to meet their community-wide climate goals. That’s despite local governments in all cities included in the research taking around 265 actions (new initiatives or expansions of past ones) to advance clean energy between January 2017 to April 2019.

Boston was once again the top-ranked city this year with a score of 77.5 out of 100. It performed well across all metrics and excelled in building policies and energy and water utilities. The city has a stringent building code called the Massachusetts Stretch Energy Code which helped it score extremely well for building policy. Boston also did well in efficiency due to considerable investments in electricity and gas efficiency programs while it also focused on comprehensive low-income and multifamily program offerings.

San Francisco came second on the scorecard with 71.50, in part due to its transportation policy. Seattle came third due to high scores in community-wide initiatives as well as its building and transportation policies. It also has a strict building energy code like Boston and it has endeavored to boost energy in existing structures. The research also noted cities that have made progress since the last scorecard—in the coming years, the cities to watch will be Hartford, Cincinnati and Providence. 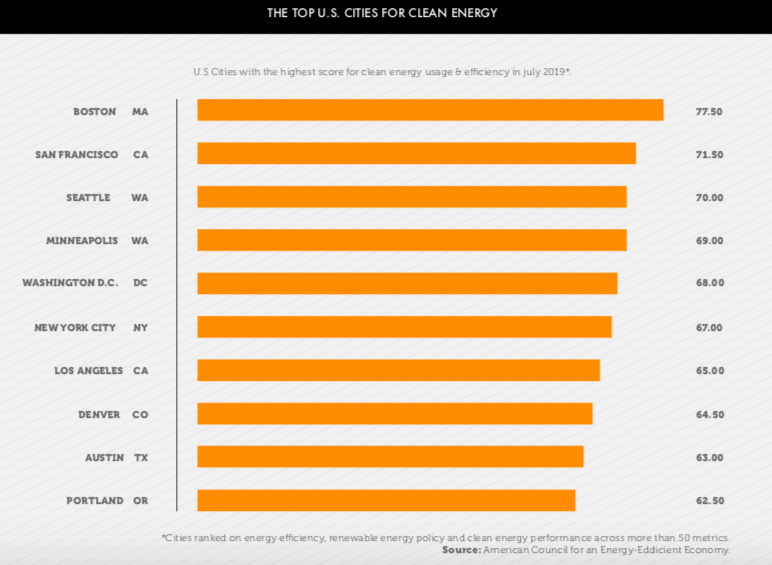