Nurses ranked ‘Most Trusted Profession’ in 2019

Nurses rank as the most trusted occupation in Gallup’s most recent poll.

As technology innovations reinvent the way we think and take care of ourselves, it’s easy to question or feel distrust in a brand or service or even believe some professions are most honest than others.

But which are these that Americans believe to be most honest and ethical?

Gallup examined the issue and released an interesting poll showing that nurses are considered the most trusted occupation in the U.S. for the 17th year in a row, with 84% of respondents choosing them as the profession that best examples honesty and ethics. Medical doctors, pharmacists and high school teachers follow nurses as the most honest professions in the country, with 60% or more of approbation among the surveyed audience.

Throughout the country, according to Alec Stone, ONS Public Affairs Director, people look to their nurses for honest answers and ethical guidance to difficult medical situations—including elected officials. When nurses speak, they listen. This indelible power ranks nurses higher than physicians, clergy, police officers, and educators, giving them a level of respect compared to many other professions in the country.

Gallup reports that, with the exception of one year, 2001, when firefighters were on the list after the 9/11 terrorist attacks, nurses have far outpaced all other professions since they were added to the list two decades ago. Before 1999, pharmacists and clergy members were frequently the most-highly rated professions for their ethics.

When it comes to not trusting, Members of Congress rank at the very bottom as nearly 58% of Americans say they have “low” or “very low” ethical standards. Car salespeople, business executives, lawyers and real estate agents also have a low part of the Gallup rank.

The top 5 states for nurses

A majority of the best states for nurses are located in the West, according to Yahoo! Finance:

The bottom 5 states for nurses

The bottom five states are nowhere near the mean wage for California:

While South Dakota is the state with the lowest average nurse salary, the South hosts a majority of the states in the bottom five. Tennessee ($61,320), West Virginia ($61,780) and Kentucky ($63,100) are also among the 10 worst-paying states. Pay is likely one of the reasons for RN shortages across the country, with these states in the lowest tier for annual wages.

The odd case of journalists

The ethics rating of journalists this year is split, with roughly equal thirds of the public saying they have very high/high, average or low/very low ethical standards.

For journalists, these findings have mixed results. Although their rating of honesty is not outstanding comparing to the other professions, it does mark a 10% point increase if compared with the same ranking two years ago, matching its record high, last recorded in 1977.

Healthcare workers, including nurses, medical doctors and pharmacists, continue to earn the highest ratings from Americans for their honesty and ethical standards. Read the complete report here.

Click to read about the five most trustworthy tech companies inside the U.S. 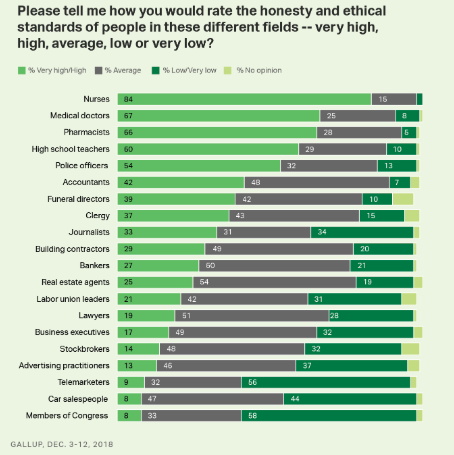