Media consumption in Canada has reached a tipping point regarding digital content and traditional media. 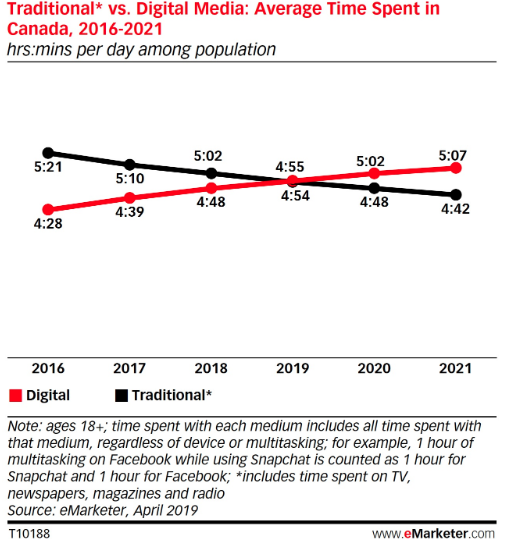 In 2019, adults in Canada will spend an average of 4 hours, 55 minutes on digital devices, compared with 4 hours, 54 minutes with traditional media, such as TV, radio and print.

Consumers’ time spent with digital media, which includes all online activities, will grow 2.6% this year. This growth has been in steady decline since 2011, when eMarketer began its forecast.

Conversely, traditional media consumption will drop 2.5% in 2019, the eighth consecutive year of declines.

“More than any other country in our global forecast, digital video time is greatest in Canada in relation to TV time,” said Paul Briggs, eMarketer’s senior analyst on Canada. “This is due to the immense popularity of Netflix and YouTube among Canadians.” 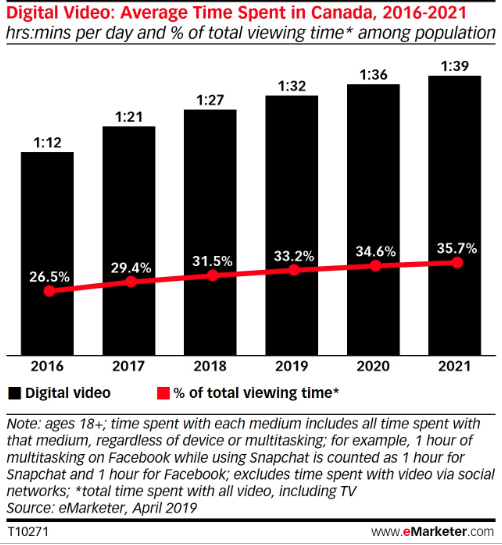 Advertising dollars are following eyeballs. Digital ad spending in Canada surpassed traditional for the first time in 2018. This trend—up from less than one-third of all spending in 2014 (30.8%)—shows no sign of slowing down, due to high levels of brand activation and engagement in digital advertising formats.

The increase in digital advertising has come at the expense of traditional formats, which show slight annual declines. TV remains a large and stable ad market at CA$3.21 billion ($2.48 billion), or 19.5% of all ad spending. This represents modest growth—0.7% this year—though we expect TV spending to decline slightly in upcoming years, as brands divert brand-building budgets in TV to more targeted and measurable advertising via digital channels like social media.

Women are taking the lead when it comes to media use, consuming more traditional media than men overall, according to the Global Media Intelligence Report 2018.

A significant number – 79.7% – still say they listen to the radio, amounting to more than one hour per day, drawing a clear correlation between the increase in age and an increase in print, radio and TV consumption.

Desktops, laptops and tablets were the most popular source of internet for Canadians, whose average daily use amounted to 3 hours and 43 minutes compared to two hours and seven minutes per day on mobile. However, 87.7% of Canadians own a smartphone versus 85.5% of desktop and laptop owners.

A major milestone in the world of advertising is happening: Digital ad spending will exceed traditional ad spending in the U.S. for the first time ever by 2023 after big numbers last year.

According to the eMarketer report, North America’s total media ad spend reached $235.23 billion in 2018 – the highest in the world – with Asia-Pacific spending an estimated $211.10 billion.

TV ad spending is expected to decline 2.2% to $70.83 billion in 2019, largely because there are no elections or big events, such as the Olympics or World Cup. 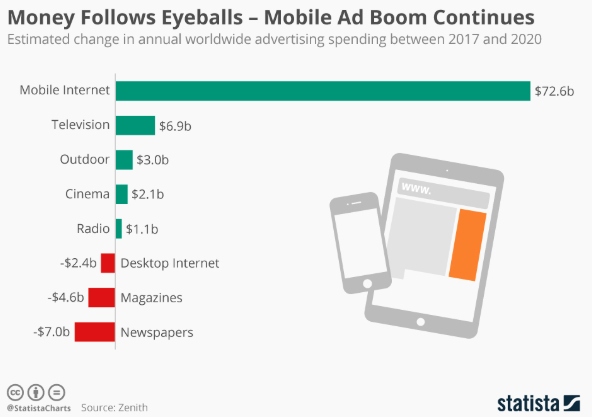