How the $90B global meat market gets disrupted

Will a meatless food industry featuring lab-grown meat and insect protein be the future of food?

At the moment, meat is still king.

By some estimates, 30% of the calories consumed globally by humans come from meat products, including beef, chicken, and pork.

Approximately 95 pounds of meat per capita have been consumed every year over the last few years, a number that has grown by 44 pounds since 1961.

That translates to a staggering number of animals grown for food: there are over 30 million beef cows in the US, and 21 million pigs in Iowa alone.

To meet demand, the meat industry has evolved into a complex global business that involves farms and feed lots, as well as meat middle-men, like processing and storage centers, transportation and logistics, slaughterhouses, and more.

Together, the 6 largest meat companies have a combined $60B in market capitalization, with the largest, Hormel, boasting a $23B valuation. 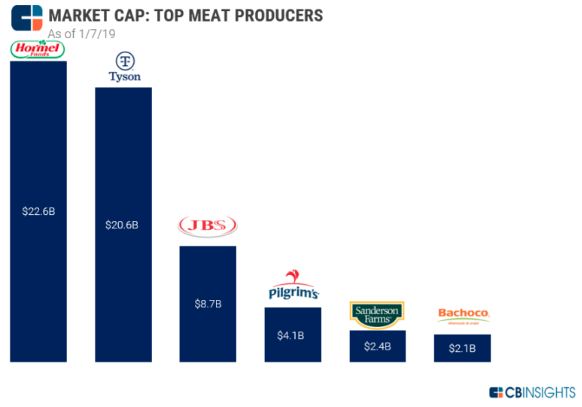 The industry has seen massive consolidation, as companies like Hormel and Brazil-based JBS have grown bigger and bigger through the acquisition of new meat brands and products.

Over the last 4 years, Hormel has spent $2.9B on acquisitions, including Applegate, Fontanini Italian Meats and Sausages, and Columbus Manufacturing.

One of the biggest deals in this space was the 2013 acquisition of US-based Smithfield Foods, which owns brands such as Armour and Farmland. Smithfield was purchased by WH Group, the largest pork producer in the world. At the time of the deal, Smithfield was valued at $7.1B.

Despite high-profile deals in the sector, the industrial meat industry faces a rising tide of challenges, in the form of interrelated business, ethical, and environmental concerns. Today, they also face a unique political situation — since the US and China entered into their trade conflict, shares of WH Group have dropped nearly 50%.

Meanwhile, startups using technology to engineer meat in labs or manufacture it from plant-based products are rising in popularity. Meatless food products from beef-free burgers to pea-based shrimp threaten the future of the meat giants.

In addition to offering new products, these startups have the potential to upend all parts of the meat production process.

Going forward, the meat value chain could be simplified dramatically, as the “clean meat” lab or factory could take the place of farms, feed lots, and slaughterhouses.

Especially vulnerable to these changes are food companies such as Tyson, Pilgrim’s, and Sanderson Farms, which rely on meat products for 80% or more of their revenue, as seen below. 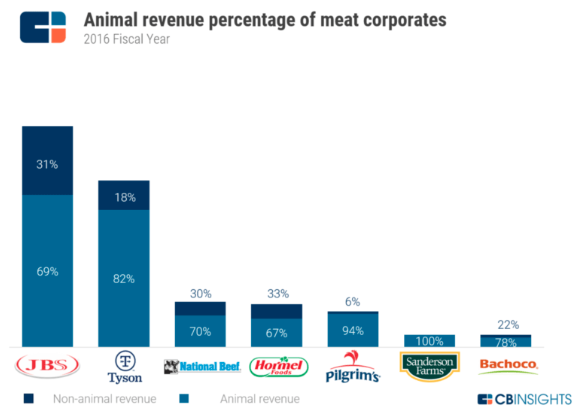 Using CB Insights data, we dug into some of the major trends in the growing meatless industry, from startups to watch to key investors to future trends & challenges.