Top Mobile Payment App in the US

Apple Pay overtakes Starbucks as the top mobile payment app in the US.

This is an original story from eMarketer | Article by eMarketer Editors

For the first time, a generic mobile payment app is more popular than the Starbucks mobile app, which had long led the category despite being specific to one retailer. Apple Pay became the market leader last year, when 27.7 million Americans used the app to make a purchase. 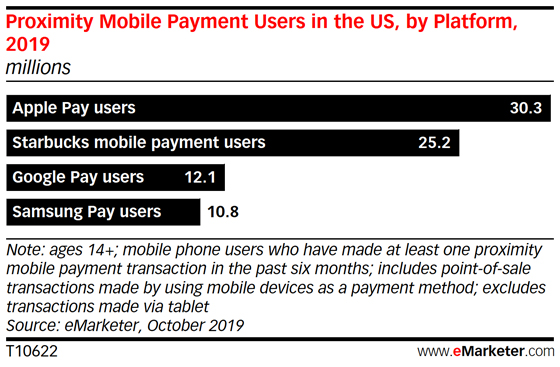 “Apple Pay has benefited from the spread of new point-of-sale (POS) systems that work with the NFC signals Apple Pay runs on,” said eMarketer principal analyst Yory Wurmser. “The same trend should also help Google Pay and Samsung Pay, but they will continue to split the Android market.”

Technology for proximity mobile payments is gaining traction, especially at frequently used retailers like grocery stores. According to Digital Trends, Apple Pay is expected to be available in 70% of US retailers by the end of 2019. The strong uptake prompted eMarketer to revise its figures upward. And while the Starbucks app has enjoyed around a 40% market share of mobile payments users for a few years, its growth potential is more limited since it can only be used at Starbucks stores. 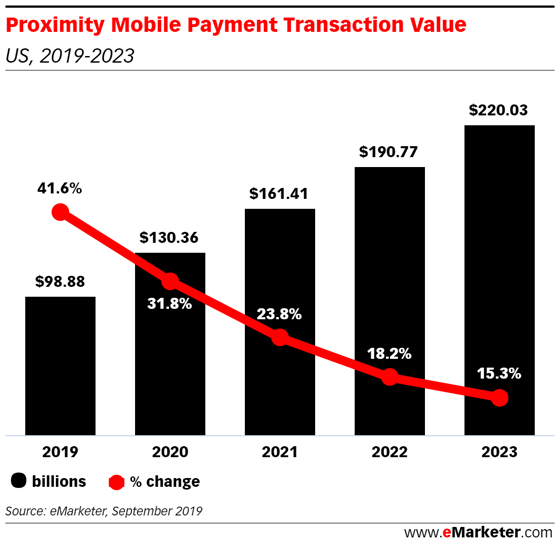 Overall, the total number of people using proximity mobile payments in the US this year will grow 9.1% to 64.0 million. That represents nearly 30% of all US smartphone users.

Although the use of proximity mobile payments is growing among all age groups, US adults ages 25 to 34 are the largest demographic in terms of absolute size and penetration, with 21.2 million users, or nearly 50% of all smartphone users in this age group. The fastest growth is among Americans ages 55 to 64 but from a small base.