The third annual Digital Trust Report from Business Insider Intelligence revealed the most trusted social platforms currently out there.

The ranking, based on an online survey of 1,974 respondents from Business Insider’s proprietary panel fielded from April 23 to May 16, 2019, showed that LinkedIn, the largest networking site for working professionals, is the most trusted social platform for the third year running, Pinterest and Instagram follow as second and third.

According to the survey, respondents where asked to rank seven major social networks, which included platforms such as Youtube, LinkedIn, Twitter, Snapchat and Pinterest on six pillars of digital trust, these were: Security, Legitimacy, Community, User Experience, Shareability, and Relevance.

Business Insider reported that LinkedIn held the top spot in three out of our six pillars, and second place in the remaining three — Shareability, User Experience, and Relevance. Its consistently high ranking stems from the professional nature of its community. This year, LinkedIn was eclipsed on two pillars where it ranked first last year: Pinterest, which was included in the Business Insider survey for the first time this year, immediately outranked every platform except LinkedIn and took the top spot on User Experience, as did Instagram on Relevance. 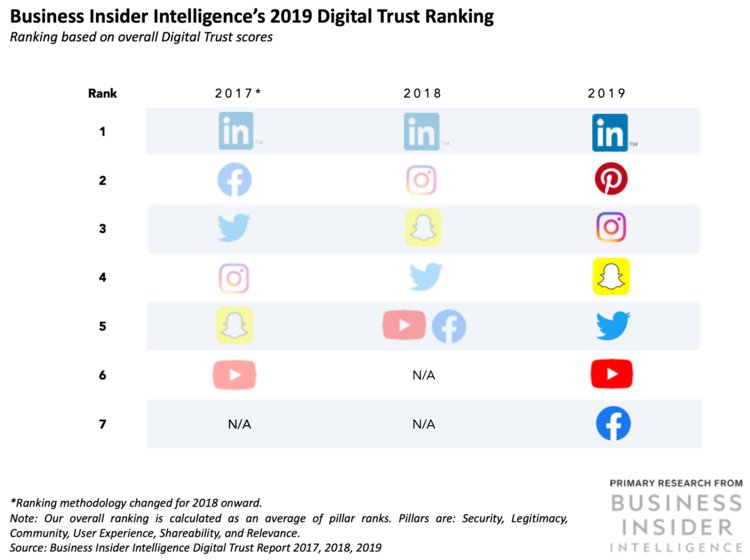