Hong Kong has recorded its first recession in a decade amid violent anti-government protests.

Six months after unrest began amid increasingly violent anti-government protests, Hong Kong has recorded its first recession in a decade, meaning its economy has contracted for two consecutive quarters.

Government data confirmed on November 15th that Hong Kong sank into recession for the first time in a decade in the third quarter weighed down also by the escalating US-Chia trade war.

With no end to the protests in sight, Reuters reports that analysts warn the financial and trading center potentially faces a longer and deeper slump than during the global financial crisis in 2008/2009 and the SARS epidemic in 2003.

“Domestic demand worsened significantly in the third quarter, as the local social incidents took a heavy toll on consumption-related activities and subdued economic prospects weighed on consumption and investment sentiment,” the government said in a statement (…) Ending violence and restoring calm are pivotal to the recovery of the economy. The government will continue to closely monitor the situation and introduce measures as necessary to support enterprises and safeguard,” the government said.

On October 27th, the financial chief of Hong Kong warned that the city was heading towards negative economic growth for the full year. He called on residents to set aside differences as the country inevitably enters technical recession. 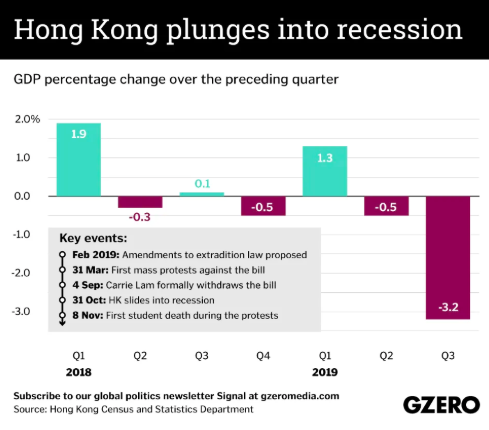 Gateway for the rich

Many industries have taken a big blow during these harsh times in Hong Kong, and industries like tourism have been hurt the most, with inbound travelers decreasing by 50% in the first half of October compared to the same period last year. The retail sector has also taken a beating, with sales dropping by 25.3 per cent in August – the biggest year-on-year drop Hong Kong has ever seen. The government has already had to roll out HK$2 billion worth of relief measures to support workers and businesses.

All these industry setbacks are making the wealthy flee. The most popular destinations were Canada and Australia, with at least 18% of respondents each, followed by Taiwan, at 11%, and Singapore at 5%. The U.S. was the top choice for just 2.9% of respondents.

Starbucks Will Exit Russia after 15 Years