Global equities had their best month since 1988.

Per Bloomberg by Claire Ballentine and Katherine Greifeld

While stocks slumped Monday, the selling did little to damage a November that will go down in the history books. Small caps rose the most on record, Bitcoin reclaimed an all-time high, and gold slumped the most in four years.

Global equities had their best month since 1988, despite the S&P 500 falling the most in more than a week. The tech-heavy Nasdaq index touched another record high on Monday. Exchange-traded funds tracking stocks in the U.S. added more than $77 billion in November, on pace for a record.

According to Bloomberg, the promising news that a coronavirus vaccine would get approved before the end of the year, and society not collapsing following the presidential election (though President Trump has still not conceded almost one month after Election Day), are two key factors that contribute to this boost.

“What’s really taken most people by surprise is that if anybody said to you in March, ‘Hey we’re going to have a year where really most businesses are working at not-full capacity, most restaurants may not even be open, people aren’t going to the office, and oh yeah, by the way, we’ll hit all-time highs,’ people would have thought you were nuts,” said JJ Kinahan, chief market strategist at TD Ameritrade. “It’s been amazing.”

For the world’s largest digital currency, November was a banner month. A red-hot 40% rally vaulted it to a record high, a milestone it last reached in 2017. Crypto fans cited a warmer institutional embrace as the catalyst for the renewed rally, while also seizing on the central-bank-money-printing narrative to promote the notion that Bitcoin is a store of wealth. 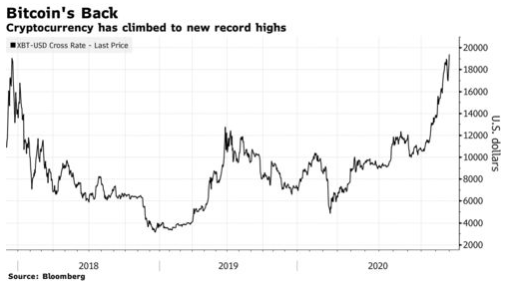 Starbucks Will Exit Russia after 15 Years