A healthy blend for better lifestyles

CEO Michael Karsch shares his believes on what sets Juice Press apart from others in the food and beverage retail business.

Former hedge fund manager Michael Karsch was an investor in Juice Press for four years before he became CEO of the health food and beverage brand in 2016.

He believes the ability to observe the company from a distance has enabled him to recognize its potential, as well as grow accustomed to the challenges he would face in the hot seat. Indeed, Karsch was so impressed by the company’s mission to become the most trusted nutrition and wellness brand in the world that he would trade in his own former junk food habit for healthy eating.

“I was fortunate to have the opportunity to learn the company, get to know the management, and think about whether my skill set was the appropriate one,” Karsch told CEO Magazine. “I realized it was a business that needed somebody who’s comfortable in multiple roles, who’s good at bringing different departments together, and most importantly, someone who believes deeply in the mission itself.”

Headquartered in New York City, Juice Press (JP) is an organic food and beverage retailer which began life on the Lower East Side of Manhattan in 2010 and has since expanded to eighty-five stores across the country, serving up a healthy blend of plant based smoothies, acai bowls, juices, soups, snacks, and salads, providing a reliable alternative to processed foods, with all of its products free of preservatives, gums, dairy, processed sugars, and GMOs.

“We believe that in five years, we’ll have the ability to triple our service,” Karsch stated of his vision for the future of the company. “And we’re company owned, we’re not a franchise system.”

Amid an increasing desire among consumers to eat healthier, Karsch views a very obvious growth arc for Juice Press in the coming years, which he believes could eventually be a competitor for the likes of Starbucks, as well as a successor to Whole Foods in promoting small vendors with breakthrough products—all the while aiming to improve the lifestyles of everyday Americans.

“I see myself as an orchestrator-conductor, and to be a good orchestrator or conductor, you have to be able to play, or at the very least, understand every instrument,” Karsch explained on the way he views his role as chairman of Juice Press. “People have a tendency to want to stay in their lane in terms of whatever area they’re focused on, and so cross-collaboration between partners is an incredibly important part of my job.”

“Every aspect of our business is interdisciplinary,” he elaborated. “Product development is a great example because you have a chef, you have the marketing department, the supply chain. You might have this great recipe, but when it comes out you find there’s too much sugar, so you reduce it, but it doesn’t taste the same anymore. Or you find that you can’t get a reliable supply chain on an ingredient that you thought was critically important.” 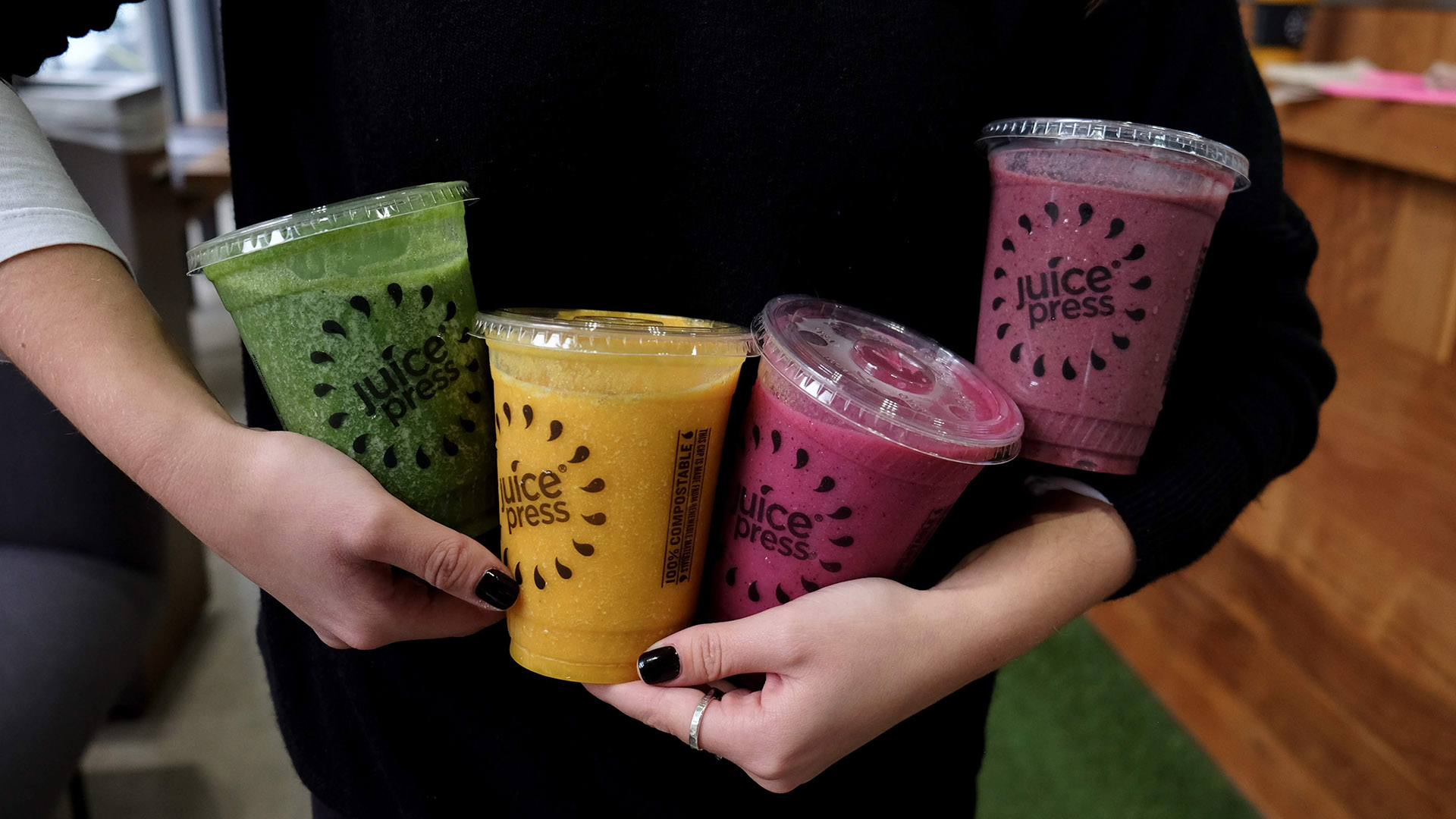 Karsch is adamant about what sets Juice Press apart from like-minded companies in the food and beverage retail business, which he cites as efficiency, innovation, and the ability of JP to capitalize on its partnerships to continue to deliver unique and high quality products.

In order to guarantee quality, Juice Press sources its fruit and vegetables from 100% USDA Organic sources, boasts its own fleet of delivery trucks to ensure efficiency, and trains its smoothie makers to produce the highest quality product at point of service so that customers keep coming back for more.

“Our partners are crucial because we don’t grow anything,” Karsch explained. “So, we’re bringing in many deliveries from different vendors throughout the day and we’re buying literally 200 different ingredients on a weekly basis. We make about 85% of our products ourselves and 15% we buy as finished products.

“We have some special partnerships—with Equinox Fitness Clubs, SoulCycle, Whole Foods, Adidas, and OTG in the Airports— which give us unique access to some of the top-spending and most influential consumers in the country. And because we generate a lot of revenue per square foot, there are a lot of places like airports and train stations that want to do business with us.”

JP’s strong partnerships have also helped it innovate its products in new and interesting ways. Karsch recalled how one of its key partners, ProViotic, a supplement manufacturer in Bulgaria that allows JP to add dairy-free, gluten free, USDA Organic probiotics to its products without violating its vegan mission, also provided a solution to crafting the company’s most popular smoothie, Blue Magic, which is known for its distinctive color and taste.

“We were using an aquatic plant-based powder to give the product its unique coloring, but we were losing half the powder every time we opened up a packet, so it became uneconomical to produce,” Karsch remembered. “So, we turned to another source of organic blue algae and our partner in Bulgaria found a way to make it in tablet form so that it could just be dropped into the mixture. They’re the only known supplier of this product in the world.” 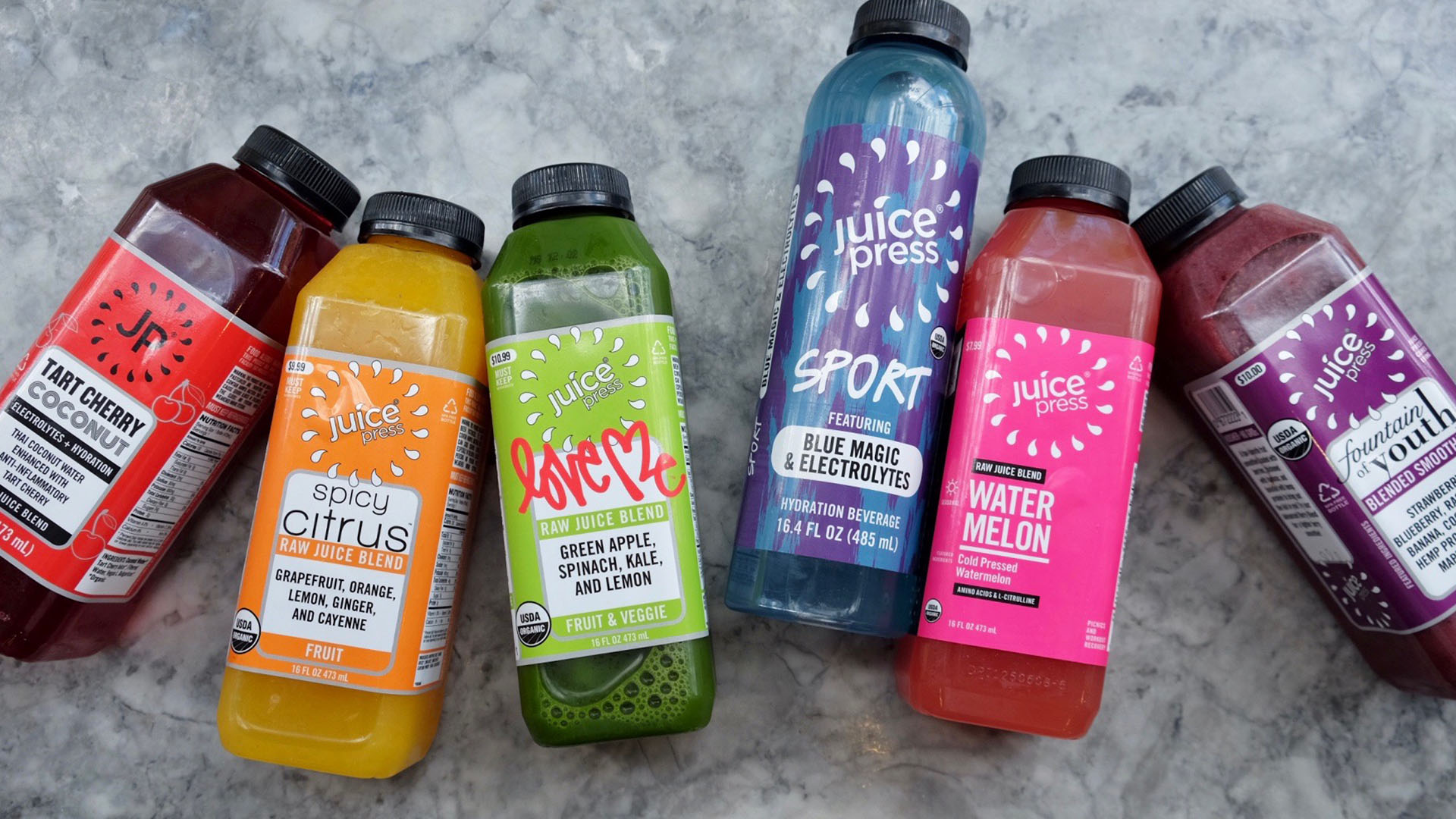 Karsch views Juice Press’s future success as dependent on its ability to broaden its product offerings, especially food products, and embrace further partnerships with young brands that want to work with a company with a virtuous and singular mission: make the consumer feel better about their consumption habits, and make them healthier.

“We want to build upon hot drinks better, and we want to build upon hot main courses in much the same way,” he insisted of JP’s future plans. “We’re thinking a lot about where we fit into the salad area and also focusing strongly on our range of bowls. People traditionally look at bowls in our type of business as acai bowls, but we really want to focus on other types of bases, like oatmeal or coconut yogurt, and I think there are a lot of opportunities for us to take the leadership in that area.”

“It’s our job to figure out as best as possible how to drive our cost curve down because the more we can lower our costs, the more cities we can be present in,” Karsch explained with regards to how JP is looking to expand and compete with the leading brands in the food and beverage retail sector. “We recognize that not all cities can afford the same prices as New York, DC, Boston, or Seattle, so the more cost-effective we can be, the more people we can serve with our mission.”

“Lastly, there are so many young brands that are coming to us and asking how they can get their products into our stores,” he added. “The question is how can we work together, and how can we be selective in that process?”