China and the US have ambitious plans on becoming the absolute leaders in AI.

The US and China both increasingly see success in Artificial Intelligence (AI) as a national imperative, so they know it’s time to act.

Nearly two years after Beijing’s central planners unveiled their ambitious plan to turn China in to the world leader in AI by 2030, the US has launched its own.

Last week, President Trump signed an executive order directing the country’s government to come up with a plan to sharpen America’s edge in AI.

Signal, a newsletter on international affairs produced by GZERO Media, presented a detailed insight on what’s to expect on the emerging US approach to a field that will shape the global balance of power in coming decades.

You can visit their site here.

The private sector is in the driver’s seat

The US and China both increasingly see success in AI as a national imperative, but to the extent that the countries are in a “race” to master AI, it’s one between Silicon Valley and China’s highly capable tech companies – not governments. Policies that flow from Washington and Beijing will play an important role in shaping how the AI revolution pans out, but government plans and the actual innovation needed to get there are two different things.

The emerging US strategy: play defense

For decades, the US’s national technology strategy has been one of benign neglect: keep the government out of the way and reap the benefits of private sector innovation. But that’s now changing under pressure from an increasingly influential contingent of national security hawks. They’re worried that if China catches up to or surpasses the US in AI or other key technology fields, it could blunt US military superiority and dull America’s economic edge.

While Trump’s executive order calls on federal agencies to come up with new ways to boost the AI sector in the US, such as making more federal data available for training AI algorithms and prioritizing AI in government R&D funding, the main thrust of the strategy is defensive. The order is focused on protecting America’s AI advantage rather than using public resources to develop new technologies. If the ongoing trade war and recent legal actions against Huawei are any guide, that could mean policies that make it harder for Chinese students to study in the US, or other efforts to limit Chinese access to US technologies – like semiconductors – that are key to making progress in AI.

The risk? In a word, overreach. President Trump wants to protect American innovation, but there’s a danger that the US ends up shooting itself in the foot by cutting off the cross-border flows of capital, talent, and knowhow that Silicon Valley has historically tapped to make new breakthroughs.

When looked at on a national level, the race for artificial intelligence (AI) dominance is between two.

The US and China are top of the charts when it comes to investment, talent, research and companies in the sector.

The US has an edge in private sector innovation and essential hardware like semiconductors, but China has greater access to important types of data and is investing heavily to catch up elsewhere.

Here’s a scorecard of how these two global superpowers are developing in the field: 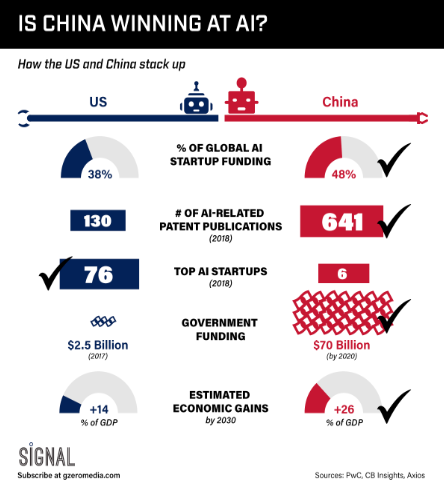