The cost of extreme weather

Extreme weather events over the last decade have extracted a heavy toll worldwide.

The 2019 Atlantic hurricane season runs from June 1 to November 30, all the areas covered include the Atlantic Ocean, Gulf of Mexico and the Caribbean Sea, and some meteorologists are predicting this season will be slightly-below average in the number of named hurricanes that the Atlantic will get.

Experts predict that the season’s most active and dangerous time runs between August and October.

Despite the regularity of these events and preparedness advised by the National Hurricane Center, they continue to cause severe damage to the population alongside with their material property. According to Statista, the highest insured catastrophe loss during 2018 was registered in North America, amounting to approximately 53 billion U.S. dollars.

The highest year on record was registered in 2017, totaling over $400 billion in losses. These losses only include damage created by atmospheric weather, like cyclones, hurricanes, and flooding. These totals do not include any damage caused by crops or wildfires, both of which have also devasted many areas around the world since 2010.

Other data from reinsurance company Munich Re has estimated total reported losses from disasters were $3.8 trillion from 1980 to 2012, attributing 74% of those to extreme weather.By this measure, compiled by Munich Re, there are six times more hydrological events now than in 1980. 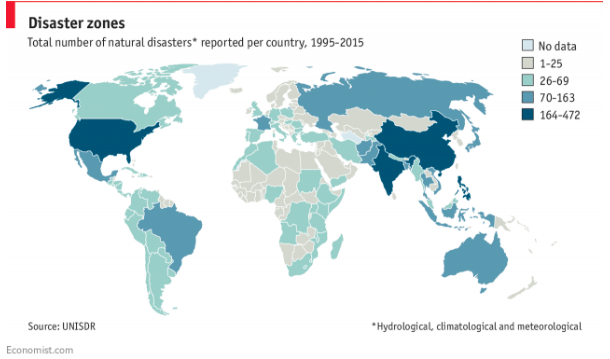 A scenario set to shift… for worst

As climate change worsens, a report by the World Bank revealed that global economic losses caused by extreme weather events have risen to nearly $200 billion a year over the last decade, and they could increase violently.

Rachel Kyte, World Bank Vice President for Sustainable Development, said “Economic losses are rising – from $50 billion each year in the 1980s to just under $200 billion each year in the last decade, and about three quarters of those losses are a result of extreme weather (…) while you cannot connect any single weather event to climate change, scientists have warned that extreme weather events will increase in intensity if climate change is left unchecked.”

The World Bank has even previously warned about the even more dangerous effects rapidly growing countries can undergo with weather-related disasters as they continue to build their economies in areas vulnerable to floods, droughts and extreme temperatures. The average impact of disasters on such countries equaled 1% of gross domestic product (GDP) from 2001 to 2006 – ten times higher than the average for high-income countries, the World Bank said.

Although natural disasters are largely seen as out of human control, human actions are at times responsible for the extremity of such events.