Taking on the industry

Fiat Chrysler has proposed a combined entity that would become the world’s third-largest carmaker.

Fiat Chrysler Automobiles (FCA) has proposed a deal that would reshape the global automotive industry.

This Monday, Fiat Chrysler pitched a finely balanced merger of equals to Renault aiming tackle the costs of far-reaching technological and regulatory changes, officially confirmed the reports heard over the weekend.

This 50/50 merger with France’s Groupe Renault, a move that would create the world’s third-largest automaker by production, will se both Fiat and Renault each own 50% of the business, combining sales of 8.7m vehicles a year — larger than General Motors.

An announcement on FCA’s website touted the merger as a chance to save €5 billion a year in synergies, merge platforms and powertrains and dump capital into EVs and other new technologies. It also said no plant closures would be needed, however, this combined business would sell approximately 8.7 million vehicles annually and most likely turn into world leader in EV technologies, premium brands, SUVs, pickup trucks and light commercial vehicles, establishing a broader and more balanced global presence than either company on a standalone basis. The proposal also wants to inject fresh life into Renault’s alliance with Japan’s Nissan.

According to Reuters, shares in both companies jumped more than 10% as investors welcomed the prospect of an enlarged business capable of producing more than 8.7 million vehicles a year and aiming for 5 billion euros ($5.6 billion) in annual savings.

The Financial Times reports that the top leadership positions were not disclosed in Monday’s proposal. However, John Elkann, who steers Exor, the Agnelli family investment vehicle, is expected to become chairman of the merged group, while Renault chair Jean-Dominique Senard would be named chief executive, multiple people close to the talks said. Englishman Mike Manley, chief executive of FCA, is expected to be named chief operating officer. A board of 11 representatives would include four representatives each from FCA and Renault and one nominee from Nissan.

Fiat Chrysler, the group behind popular brands such as Jeep, Dodge, Ram and Alfa Romeo, was the seventh largest automobile group in the world last year, selling 4.8 million vehicles in total. Renault’s 3.88 million cars sold in 2018 put the French auto-maker right behind FCA.
The Volkswagen Group leads the list with 10.90 million cars sold during last year, Toyota is second with 10.60 units sold, while General Motors ranks third with 8.38 million vehicles sold during 2018.
Click here to see the full infographic via Statista. 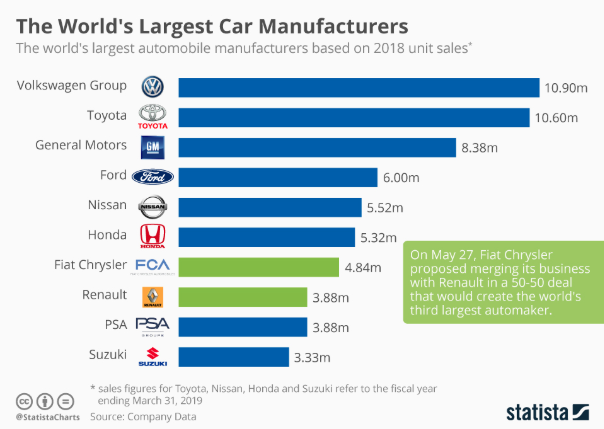