The gender pay gap is wider among men and women with a bachelor’s degree.

Among workers with a bachelor’s degree, women earn 74 cents for every dollar men make, which is less than the 78 cents for workers without the college degree.

While workers with a bachelor’s degree earn about double that of their co-workers without a college education, the difference between men’s and women’s earnings widens with more education.

Age and job choice can affect the size of the pay gap.

Women workers with a bachelor’s degree are younger on average and many are years away from the earnings peak usually reached by people in their 50s.

Higher pay reflects years of work experience and pay raises. The earnings differences between men and women also peak in their 50s, although men on average earn more at every age than their female counterparts.

Among workers with a bachelor’s degree, women are considerably younger, on average, than men (median ages of 42 vs. 45). This results in a larger pay gap, as women have had less time to accumulate experience and pay raises. 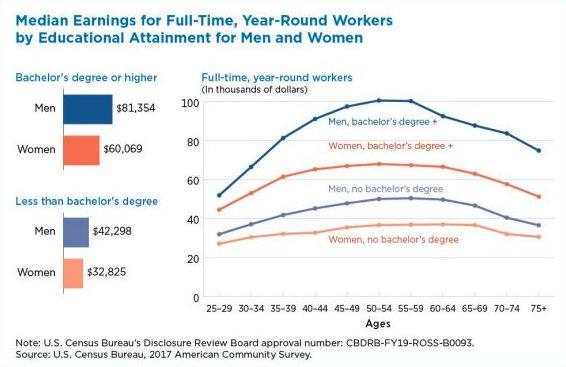 At all ages in both education groups, men outnumber women except for the youngest age group (25-29) with a bachelor’s degree.

The influx in recent decades of college-educated women has driven their numbers to record levels. In fact, the number of women working full time, year-round with a bachelor’s degree is almost equal to men’s (18 million women and 21 million men).

Women are more likely to have a bachelor’s degree than men (41.7% compared with 36.2%) among full-time, year-round workers. This is particularly true for workers under age 60.

As older educated male workers age out of the labor force, this pattern of the college-educated workforce dominated by women may continue. Of note, male workers without a bachelor’s degree make up the largest group by far. 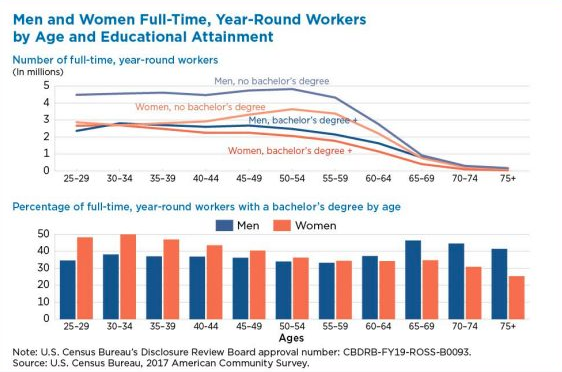 In some occupations, the earnings gap virtually disappears.

The mixture of the jobs men and women hold, and the earnings differences among these occupations, also contribute to the overall earnings gap.

This interactive visualization illustrates these relationships for about 400 occupations. It provides easy comparisons of median earnings differences by median age for men and women workers by occupation.

It’s even worse when we look specifically at women of color, according to Forbes, as Latinas earn 54 cents for every dollar paid to white, non-Latino men, while the ratio is 57 cents for Native Americans and 63 cents for African-Americans. In other words, men with the same qualifications and degrees as their female counterparts earn more than women performing the same jobs, across industries and fields, with pitifully few exceptions.

Among full-time, year-round workers, some of the largest occupations for women are secretaries and administrative assistants, registered nurses, and elementary and middle school teachers. For men, the list includes driver/sales workers and truck drivers, first-line supervisors of retail sales workers, janitor and building cleaners, and construction laborers.

Statistics in this story are from the Detailed Occupation and Education Table Package and an analysis of 2017 data from the American Community Survey.