Breaking through to the other side

Experts begin to see Airbnb as a palpable threat to the hotel industry.

Airbnb is not joking around, it really aims for the gold.

According to recent data, the US hotel industry brings in more than $200 billion in revenue a year, however, 2018 meant a significant milestone for the company because it gathered nearly a fifth of consumer bookings going through the service in the United States during last year.

This is truly outstanding after noting that the app only considers its revenue to be the fees it gets from renters and travelers, not the gross bookings.

Statista data shows that major hotels made up around 70% of consumer bookings during 2018, a drop from 94% five years ago, while Airbnb, in that same span of time, has managed to go from 3% of the market to nearly 20%.

Costumer Airbnb spending is catching up to Marriott, the world’s largest hotel company, which added to its revenue by acquiring Starwood hotels in 2016. 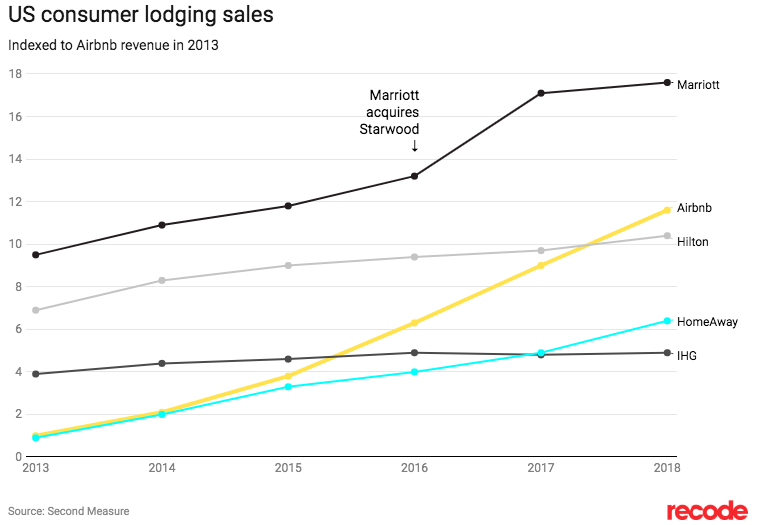 The keys to success

Out of all US consumer lodging spending last year, Airbnb made up nearly 20%, according to Second Measure data. HomeAway, its home-sharing competitor owned by the travel booking site Expedia, brought in 11%.

But what are the keys to success?

The company’s willingness to evolve and diversify its revenue, moving from a room sharing service into more of a hybrid hotel-lodging company, is really what has the company blowing sky-high. As it branches out more directly into the hotel space, offering boutique spaces and other varieties, the app can only grow up.

Click here to see the most active cities on the app.

If Spring Break Patterns Hold, May Indicate That U.S. Travel is Back at Pre-Pandemic Levels

UNWTO and WHO: Travel Measures Should Be Based on Risk Assessment

How to win the race to capture travel demand