Children are developing asthma every year as a result of air pollution from traffic fumes.

A landmark study published in medical journal The Lancet has found that while global pediatric asthma prevalence has increased strikingly since the 1950s, several epidemiological studies done in North America, Latin America, Europe, and east Asia reported associations between traffic-related air pollution (TRAP) exposure and new-onset asthma in children, whereas such associations are less clear in adults.

This has resulted in over four million children developing asthma every year as a result of air pollution from traffic, that’s equivalent to 11,000 new cases a day.

Breaking down the data, Kuwait had the highest prevalence with 550 new cases recorded per 100,000 children each year. Canada came third with 450 new annual cases. The United States experienced an incidence rate of 300 new asthma cases per 100,000 children.

You can visit the full report here. 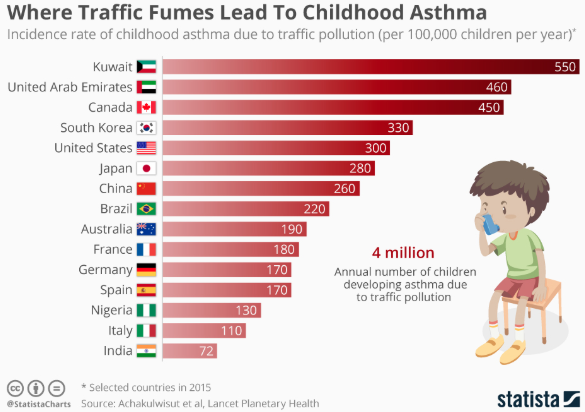 Despite good efforts, however, traffic is getting worse in many cities, and urban mobility has become increasingly complex.

The conditions have established that, as of today, 95% of the planet’s population is forced to breathe unhealthy air, turning deaths related to contamination the 4th highest worldwide after smoking, high blood pressure and a poor diet.

According to the study, Afghanistan, which is where most people die from pollution, followed by Pakistan, India, Nigeria, China and Saudi Arabia.