The real cost of not affording treatment

34 million US adults know someone who died after not receiving needed medical treatment.

Health care costs can add up quickly and become a burden, but what’s worse is what’s happening with those who cannot afford it: They’re dying.

A new study by Gallup and West Health has revealed alarming facts when it comes to receiving treatment, as more than 13% of American adults — or about 34 million people — report knowing of at least one friend or family member in the past five years who died after not receiving needed medical treatment because they were unable to pay for it.

Although the results from the Gallup and West Health study is not meant to quantify the number of people who have died after not being able to pay for medical treatment, but rather the number of people who report knowledge of a death under such circumstances, there is a worrying state of how people are able to access healthcare, medical treatment, and the opportunity of acquiring medication in the United States.

Not having enough money in the past 12 months to “pay for needed medicine or drugs that a doctor prescribed” to patients has coupled with the substantial number of Americans who know someone who has died after not receiving treatment because of their inability to pay for it, underscoring the urgency to tackle healthcare costs and highlighting the significant practical implications of drug prices on U.S. residents, as well as the effects of healthcare policy action — or inaction, according to Gallup.

Close to nine in 10 U.S. adults report that the costs of prescription drugs are “usually much higher” (69%) or “tend to be somewhat higher” (20%) than what consumers should be paying for them, compared with only 1% who believe them to be much or somewhat lower.

Overall views of the U.S. health care system have been largely consistent for many years: most want fundamental changes or a completely rebuilt system. According to a CBS News poll, two-thirds of Americans are very concerned with keeping costs down, more than ensuring everyone has health care coverage (56%). They are comparatively less concerned about improving the quality of the care they receive. 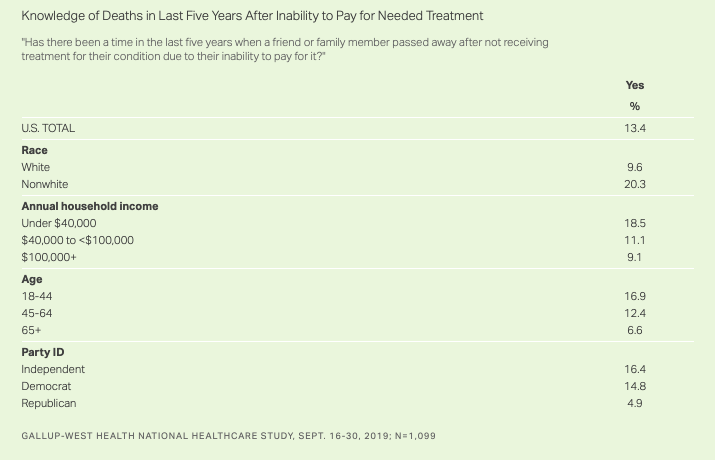 The cost of not affording treatment… but for politics

There is no doubt: Drug prices directly affect consumers, and with the U.S. one year away from the 2020 election, presidential candidates will increasingly be asked to explain and defend their policy positions regarding rising drug costs.

Gallup also reported that only 7% of U.S. adults believe that the Trump administration has accomplished “a great deal” on the issue, and voters are clearly expecting more from their elected officials than what has been accomplished in the past three years. In Congress, meanwhile, the U.S. House of Representatives is expected to vote soon on House Democrats’ plan to curb soaring prescription drug prices by allowing the federal government to negotiate prices of certain drugs, including insulin products and single-source brand-name drugs with no generic competition. The U.S. Senate, on the other hand, is considering a separate, bipartisan proposal that would cap seniors’ out-of-pocket costs and require drug manufacturers to reimburse Medicare if prices rise more than the inflation rate.

Click here to read about these ongoing challenges and other critical issues of our time that West Health and Gallup have measured.