Since 1978, CEO compensation has grown 940%, in contrast, during that time, wages for the typical worker have grown by just 11.9%, resulting in overpaid C-Suites.

When thinking about the top executive in business, one can conjure many ideas, from powerful to overpaid, leader to misguided.

While CEOs vary as greatly as the organizations they represent, certain aspects like exorbitant pay call for special attention. Why? Because CEO pay is a core contributor to America’s extreme and growing income inequality, and the economy would suffer no harm if CEOs were paid less (or taxed more –see the Bernie Sanders income inequality tax plan–), but as chief executives are actually earning more because of their power to set pay, not because they are increasing productivity or possess specific, high-demand skills, according to an Economic Policy Institute report from August 2019.

Chief executive officers of large US companies earn far more than the average worker, in fact, CEO compensation has grown 52.6% in the recovery since 2009 using the options-exercised measure and 29.4% using the options-granted measure, while the typical workers in these large firms saw their annual compensation grow by just 5.3% over the recovery and actually fall by 0.2% between 2017 and 2018. These big numbers have resulted in a large list of disproportionately overpaid CEOs, ones who even receive compensation that was $200 million above what the performance of the company justified, states the sixth annual report of The 100 Most Overpaid CEOs of the S&P 500: Are Fund Managers Asleep at the Wheel?. In this list, the Walt Disney company appears for the third year in a row, and American International, Ameriprise, Centene, Jefferies Financial, and Netflix appear for the second year in a row.

“The 10 most overpaid CEOs as a group destroy shareholder value with negative returns for the worst decile of CEO pay — and the 100 Most Overpaid CEOs of the S&P500 under-perform financially for investors, relative to the benchmark index, on total shareholder return. This lack of accountability by boards to control CEO Pay, especially when financial performance lags, contributes to the investor revolts in action or brewing, and the overall investor and citizen frustration with growing inequality,” said R. Paul Herman, CEO and founder of HIP (Human Impact + Profit) Investor Inc.

Mark V. Hurd & Safra A. Catz, from the Oracle Corporation; Joseph M. Hogan, from Align Technology Inc.; and Robert  Iger, from the Walt Disney Company, rank as the top 3 most overpaid CEOs according to the survey. 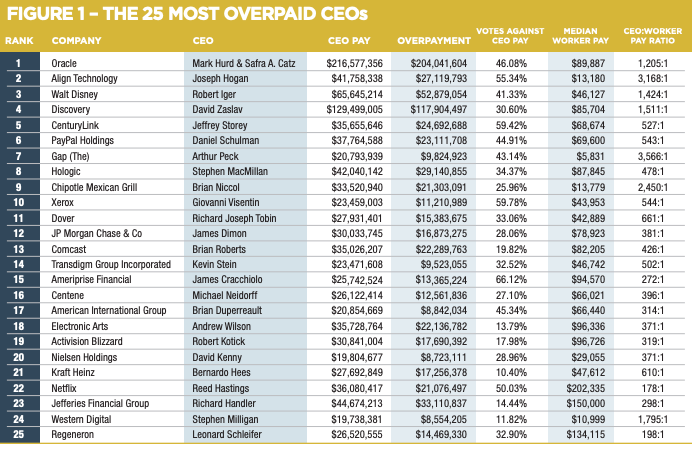