Great problem solvers are made, not born.

Great problem solvers are made, not born. That’s what we’ve found after decades of problem solving with leaders across business, nonprofit, and policy sectors. These leaders learn to adopt a particularly open and curious mindset, and adhere to a systematic process for cracking even the most inscrutable problems. They’re terrific problem solvers under any conditions. And when conditions of uncertainty are at their peak, they’re at their brilliant best.

Six mutually reinforcing approaches underly their success: (1) being ever-curious about every element of a problem; (2) being imperfectionists, with a high tolerance for ambiguity; (3) having a “dragonfly eye” view of the world, to see through multiple lenses; (4) pursuing occurrent behavior and experimenting relentlessly; (5) tapping into the collective intelligence, acknowledging that the smartest people are not in the room; and (6) practicing “show and tell” because storytelling begets action. 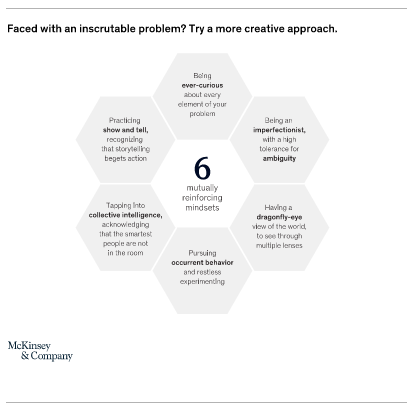 As any parent knows, four-year-olds are unceasing askers. Think of the never-ending “whys” that make little children so delightful—and relentless. For the very young, everything is new and wildly uncertain. But they’re on a mission of discovery, and they’re determined to figure things out. And they’re good at it! That high-energy inquisitiveness is why we have high shelves and childproof bottles.

When you face radical uncertainty, remember your four-year-old or channel the four-year-old within you. Relentlessly ask, “Why is this so?” Unfortunately, somewhere between preschool and the boardroom, we tend to stop asking. Our brains make sense of massive numbers of data points by imposing patterns that have worked for us and other humans in the past. That’s why a simple technique, worth employing at the beginning of problem solving, is simply to pause and ask why conditions or assumptions are so until you arrive at the root of the problem.

Natural human biases in decision making, including confirmation, availability, and anchoring biases, often cause us to shut down the range of solutions too early. Better—and more creative—solutions come from being curious about the broader range of potential answers.

One simple suggestion from author and economist Caroline Webb to generate more curiosity in team problem solving is to put a question mark behind your initial hypotheses or first-cut answers. This small artifice is surprisingly powerful: it tends to encourage multiple solution paths and puts the focus, correctly, on assembling evidence. We also like thesis/antithesis, or red team/blue team, sessions, in which you divide a group into opposing teams that argue against the early answers—typically, more traditional conclusions that are more likely to come from a conventional pattern. Why is this solution better? Why not that one? We’ve found that better results come from embracing uncertainty. Curiosity is the engine of creativity.

When we think of problem solvers, many of us tend to picture a poised and brilliant engineer. We may imagine a mastermind who knows what she’s doing and approaches a problem with purpose. The reality, though, is that most good problem solving has a lot of trial and error; it’s more like the apparent randomness of rugby than the precision of linear programming. We form hypotheses, porpoise into the data, and then surface and refine (or throw out) our initial guess at the answer. This above all requires an embrace of imperfection and a tolerance for ambiguity—and a gambler’s sense of probabilities.

The real world is highly uncertain. Reality unfolds as the complex product of stochastic events and human reactions. The impact of COVID-19 is but one example: we address the health and economic effects of the disease, and their complex interactions, with almost no prior knowledge. We have to be comfortable with estimating probabilities to make good decisions, even when these guesses are imperfect. Unfortunately, we have truckloads of evidence showing that human beings aren’t good intuitive statisticians. Guesses based on gut instinct can be wildly wrong. That’s why one of the keys to operating in uncertain environments is epistemic humility, which Erik Angner defines as “the realization that our knowledge is always provisional and incomplete—and that it might require revision in light of new evidence.”

Recent research shows that we are better at solving problems when we think in terms of odds rather than certainties. For example, when the Australian research body Commonwealth Scientific and Industrial Research Organisation (CSIRO), which owned a core patent on the wireless internet protocol, sought royalties from major companies, it was initially rebuffed. The CSIRO bet that it could go to court to protect its intellectual property because it estimated that it needed only 10 percent odds of success for this to be a good wager, given the legal costs and likely payoff. It improved its odds by picking the weakest of the IP violators and selecting a legal jurisdiction that favored plaintiffs. This probabilistic thinking paid off and eventually led to settlements to CSIRO exceeding $500 million. A tolerance for ambiguity and a willingness to play the odds helped the organization feel its way to a good solution path.

To embrace imperfectionism with epistemic humility, start by challenging solutions that imply certainty. You can do that in the nicest way by asking questions such as “What would we have to believe for this to be true?” This brings to the surface implicit assumptions about probabilities and makes it easier to assess alternatives. When uncertainty is high, see if you can make small moves or acquire information at a reasonable cost to edge out into a solution set. Perfect knowledge is in short supply, particularly for complex business and societal problems. Embracing imperfection can lead to more effective problem solving. It’s practically a must in situations of high uncertainty, such as the beginning of a problem-solving process or during an emergency.

Dragonfly-eye perception is common to great problem solvers. Dragonflies have large, compound eyes, with thousands of lenses and photoreceptors sensitive to different wavelengths of light. Although we don’t know exactly how their insect brains process all this visual information, by analogy they see multiple perspectives not available to humans. The idea of a dragonfly eye taking in 360 degrees of perception6 is an attribute of “superforecasters”—people, often without domain expertise, who are the best at forecasting events.

Consider the outbreak of HIV in India in the early 1990s—a major public-health threat. Ashok Alexander, director of the Bill & Melinda Gates Foundation’s India Aids Initiative, provided a brilliant example of not just vision but also dragonfly vision. Facing a complex social map with a rapidly increasing infection rate, he widened the problem’s definition, from a traditional epidemiological HIV transmission model at known “hot spots,” to one in which sex workers facing violence were made the centerpiece.

This approach led to the “Avahan solution,” which addressed a broader set of leverage points by including the sociocultural context of sex work. The solution was rolled out to more than 600 communities and eventually credited with preventing 600,000 infections. The narrow medical perspective was sensible and expected, but it didn’t tap into the related issue of violence against sex workers, which yielded a richer solution set. Often, a secret unlocks itself only when one looks at a problem from multiple perspectives, including some that initially seem orthogonal.

The secret to developing a dragonfly-eye view is to “anchor outside” rather than inside when faced with problems of uncertainty and opportunity. Take the broader ecosystem as a starting point. That will encourage you to talk with customers, suppliers, or, better yet, players in a different but related industry or space. Going through the customer journey with design-thinking in mind is another powerful way to get a 360-degree view of a problem. But take note: when decision makers face highly constrained time frames or resources, they may have to narrow the aperture and deliver a tight, conventional answer.

Read the rest of six problem-solving mindsets in the full McKinsey article here.